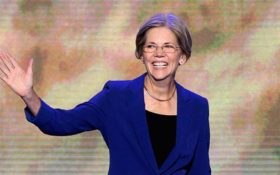 Sen. Elizabeth Warren, D-Mass., was the favorite target of her Democratic colleagues at the fourth presidential primary debate on Tuesday.

But she wasn’t alone. Luckily for Warren, she had some help — from CNN.

It was Warren’s response to one question from a CNN moderator that has gained the most attention on social media — because no one was supposed to hear it.

Warren was caught in a hot mic moment talking to liberal CNN host Jake Tapper just before a post-debate interview.

The two seemed to be discussing something before the segment, when Warren was overheard giving Tapper instructions about what to ask. Before being cut-off, Warren was heard telling Tapper, “I can’t say that.”

What exactly was it that she couldn’t say?

Warren’s camp has been silent.

You can see the video for yourself below:

That wasn’t the only nasty moment CNN had Tuesday.

CNN moderator Erin Burnett cut off Rep. Tulsi Gabbard, D-H.I., as she challenged Warren’s credientials, and ordered the director to cut to commercial.

It came just days after a secret undercover video, taken by an investigative journalist, seemed to confirm that CNN’s bosses are pushing for Warren to win the nomination.

The video, released by conservative activist group Project Veritas, showed a CNN employee talking about how the company loves Warren — and doesn’t want Gabbard to win.

“I’d like to ask our other candidates this question; I’d like to start with Senator Warren,” Gabbard started before she was interrupted by the moderator.

“What experience and background do you have to serve as commander-in-chief?” Gabbard continued, looking at Warren. Gabbard is a military veteran, and was trying to point out that Warren had no military experience.

“I’m sorry, thank you. We’re gonna take another break now,” Burnett said, and the network quickly cut to a commercial.