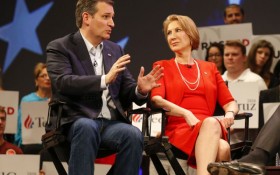 An astonishing Republican presidential primary season has taken another unusual turn, with Texas Sen. Ted Cruz announcing business executive Carly Fiorina as his running mate — even though he’s mathematically unable to become the GOP nominee through the regular voting process.

It was the move of a candidate desperate to block Donald Trump, a front-runner who is only growing stronger as the primary contest presses deeper into the spring.

Trump now has 80 percent of the delegates he needs for the Republican nomination, though he could still fall short and have to battle Cruz for the nomination at a contested convention. Trump must win 48 percent of the remaining delegates to avoid that scenario.

In fiery remarks, Fiorina panned Trump and Clinton as a pair of liberals who would do little to shake up Washington.

“They’re not going to challenge the system — they are the system,” Fiorina said.

In response, Trump supporters gleefully revealed a shocking tape from January that reveals Fiorina’s true thoughts on Cruz — and how she says he’ll say anything to win.

While Cruz grasped for a way to slow Trump, the businessman turned his attention to the general election. In a wide-ranging foreign policy speech, Trump sought to answer questions about his temperament and preparedness to be commander in chief.

Trump won more than 50 percent of the Republican votes in Pennsylvania, Connecticut and Maryland in Tuesday’s elections, and scored over 60 percent in Delaware and Rhode Island.