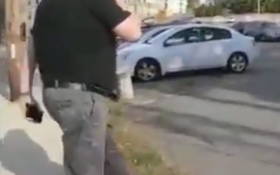 Former Democratic State Rep. Matt Trowbridge was seen in a video waiting in what appeared to be the lobby of an apartment complex.

He was there allegedly coordinating what he thought was a rendezvous for a sexual encounter.

A member of activist group Predator Poachers for Massachusetts went to meet with Trowbridge to catch him in the act.

What the activist caught on video seemed almost too good to be true.

The videographer recorded everything, capturing the moment that Trowbridge is accused.

Prior to the meetup, Trowbridge was tricked into exchanging sexual text messages with Predator Poachers activist, the group says. When the undercover activist said they were “14 going on 15,” Trowbridge responded, saying “nice.”

Screenshots of their alleged inappropriate text messages — including photos — have since sgone viral the internet.

Once Trowbridge realizes he’s busted, he takes off.

The activist — wearing a body camera and holding a separate cameraphone — proceeds to follow Trowbridge, who dashes back to his car.

“Shoulda known this was gonna happen,” the activist said. “I’m gonna get your plates.”

“Stop meeting minors off the internet,” the activist yells after Trowbridge, who speeds off.

You can watch the video below.

A candidate who ran for state representative in Massachusetts, Matt Trowbridge, gets caught trying to meet a 14 year old pic.twitter.com/wEkHxNRdKV