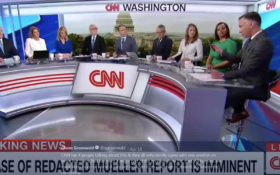 Our representatives began voting for a new House speaker Tuesday. Politicians and pundits have been watching the roll call anxiously… and, apparently, angrily.

CNN sent its biggest stars to cover the vote, and he had one word to describe it.

“We’re hearing things are getting very heated behind closed doors,” Raju said on the air.

“Now, he is also getting some pushback in the room, we are told from both, our sources are telling our Capitol Hill team here that Lauren Boebert, the Colorado Republican congresswoman, said ‘Bullsh*t!’ in response to what Kevin McCarthy said.” Raju didn’t censor himself.

McCarthy is running for House speaker. So far, he has failed to whip enough votes among more conservative congressmen and women who are rejecting the Republican establishment choice.

“Kevin McCarthy is essentially done, he’s signaling, with negotiating with his bloc of conservatives who are seeking a number of concessions to weaken the speakership, to empower them. He said he’s gone so far and they have refused to get to yes, he’s raising his voice. He’s detailing everything that he has done. And he said, quote, ‘I have earned this job,'” Raju continued.

“McCarthy is saying he is not going anywhere. If he does not get 218 votes on that first ballot at noon today. He’s going to grind it out. He said that he’s going to fight this going forward.”

Meanwhile, McCarthy was dealt two historic defeats in the first second round of voting Tuesday to become House speaker, vowing to try again but sending the new Congress into opening day tumult as conservative colleagues opposed his leadership.

According to the Associated Press, McCarthy had pledged a “battle on the floor” for as long as it takes to overcome right-flank fellow Republicans who were refusing to give him their votes. But it was not at all clear how the embattled GOP leader could rebound after becoming the first House speaker nominee in 100 years to fail to win the gavel from his fellow party members on the initial vote.

A challenge was quickly raised by Rep. Andy Biggs, R-Ariz., a conservative former leader of the Freedom Caucus, who was nominated by a fellow conservative as speaker. In all, 19 Republicans peeled away, denying McCarthy the majority as they cast votes for Biggs or others in protest.

The mood was tense, at least on the Republican side, as lawmakers rose from their seats, in a lengthy first round of in-person voting.

“We may have a battle on the floor, but the battle is for the conference and the country,” McCarthy said earlier at the Capitol.

McCarthy emerged from the contentious closed-door meeting with fellow House Republicans unable to win over detractors and lacking the support needed to become speaker. He vowed to fight to the finish — even if it takes multiple tries in a public spectacle that would underscore divisions in his party and weaken its leadership in the first days of the new Congress.

A core group of conservatives led by the Freedom Caucus and aligned with Donald Trump’s MAGA agenda were furious, calling the private meeting a “beat down” by McCarthy allies and remaining steadfast in their opposition to the GOP leader.

The group said McCarthy refused the group’s last-ditch offer for rules changes in a meeting late Monday at the Capitol.

“He eagerly dismissed us,” Boebert said, according to the Associated Press.