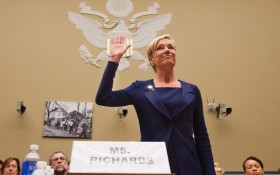 In the face of increasingly furious calls to cut their federal funding, Planned Parenthood is backing down. The controversial organization, the nation’s largest abortion provider, said it will no longer sell baby parts to the highest bidder.

However, the victory is a small one for Pro-Life groups. Planned Parenthood says it will still maintain the programs that make the tissue of unborn babies available for research, but will cover the costs itself rather than accepting any payouts.

The new policy — forgoing even permissible reimbursement — was outlined in a letter sent Tuesday by Planned Parenthood’s president, Cecile Richards, to Francis Collins, the director of the National Institutes of Health.

The videos were released, starting in mid-July, by a group of anti-abortion activists called the Center for Medical Progress. Activists posed as representatives of a biomedical firm and sought to negotiate the purchase of fetal organs from some Planned Parenthood personnel.

“If the money Planned Parenthood has been receiving for baby body parts were truly legitimate ‘reimbursement,’ why cancel it?” he asked.

Republicans in control of Congress have responded to the undercover videos by launching several investigations of Planned Parenthood, along with efforts to cut off the organization’s federal funding.

Rep. Jason Chaffetz, a Utah Republican who chairs the House Oversight and Government Reform Committee, described Planned Parenthood’s policy change as “a good, tangible result” of the various House investigations. He said his own panel would continue its inquiry into Planned Parenthood’s use of federal funding.

“Planned Parenthood’s decision is clearly an effort at damage control — to preserve its carefully cultivated (and ferociously defended) image as merely a women’s health care organization,” said by email. “Nothing Planned Parenthood has done today will change its role as the world’s leading abortion provider.”

“It is curious that, while Planned Parenthood officials maintain there has been no wrongdoing, they still find it necessary to change their policy,” Black said. “Clearly, this was a decision motivated by optics rather than the organization’s conscience.”