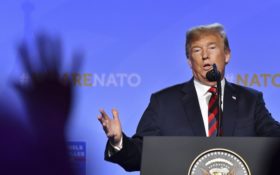 President Donald Trump closed out his two-day visit to NATO Thursday by declaring victory, stating that member nations caved to his demands to significantly increase defense spending and reaffirming his commitment to the alliance — a triumph that critics say former President Barack Obama never accomplished.

Trump had spent his time in Brussels making his anger clear to the members of the military alliance for failing to spend enough of their money on defense,“Yesterday I let them know that I was extremely unhappy with what was happening,” Trump said, adding that, in response, European countries agreed to up their spending.

“They have substantially upped their commitment and now we’re very happy and have a very, very powerful, very, very strong NATO,” he said.

Trump suggested a speeded-up timeline, saying nations would be “spending at a much faster clip,” which if it panned out would mark a significant milestone for the alliance.

U.S. leaders for decades have pushed NATO allies to spend more on defense in an effort to more equitably share the burden in the mutual-defense organization.

NATO countries in 2014 committed to move toward spending 2 percent of their gross domestic products on defense within 10 years. NATO has estimated that only 15 members, or just over half, will meet the benchmark by 2024 based on current trends.

Earlier Thursday, Trump called out U.S. allies on Twitter, saying, “Presidents have been trying unsuccessfully for years to get Germany and other rich NATO Nations to pay more toward their protection from Russia.”

He complained the United States “pays tens of Billions of Dollars too much to subsidize Europe” and demanded that member nations meet their pledge to spend 2 percent of GDP on defense, which “must ultimately go to 4%!”

Presidents have been trying unsuccessfully for years to get Germany and other rich NATO Nations to pay more toward their protection from Russia. They pay only a fraction of their cost. The U.S. pays tens of Billions of Dollars too much to subsidize Europe, and loses Big on Trade!

….On top of it all, Germany just started paying Russia, the country they want protection from, Billions of Dollars for their Energy needs coming out of a new pipeline from Russia. Not acceptable! All NATO Nations must meet their 2% commitment, and that must ultimately go to 4%!

Still, as the mainstream media has failed to report, Trump has worked feverishly both in front of the camera and behind the scenes, including at a leaders’ dinner Wednesday.

“I have to tell you that the atmosphere last night at dinner was very open, was very constructive and it was very positive,” Kolinda Grabar-Kitarovic, the president of Croatia, told reporters.

Trump next stop is the United Kingdom. His itinerary will include a black-tie dinner with business leaders, a meeting with May, and an audience with Queen Elizabeth II.

Woody Johnson, the U.S. ambassador to the United Kingdom, told Fox News that one of the reasons the two countries are so close “is because we have the freedoms that we’ve all fought for. And one of the freedoms we have is freedom of speech and the freedom to express your views. And I know that’s valued very highly over here and people can disagree strongly and still go out to dinner.”

He also said meeting the queen would be an experience Trump “will really cherish.”