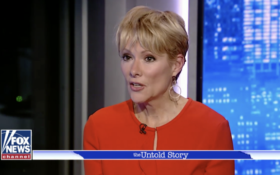 Longtime Fox News anchor Gerri Willis shared a message for her followers over the weekend. Years after being diagnosed with and beating lobular breast cancer, another serious health threat has emerged.

Pre-cancerous cells have appeared on her cervix.

“I’m still breast cancer-free thanks to the efforts by my incredible doctors at Memorial Sloan Kettering, but now, I have another foe: HPV or human papillomavirus,” she announced.

Willis is currently on a leave of absence. She had reportedly been awaiting surgery as of January 28, when she wrote to her fans in a column.

And after what she described as some heavy deliberation on whether or not to talk about the matter, she says she’s ultimately speaking up about it now because “the truth is, HPV is worth talking about simply because it is ignored.”

She said she spoke out to combat the stigma associated with HPV.

“I debated whether to talk about this publicly. After all, HPV is transmitted by sexual contact. It’s embarrassing. Not the topic of polite cocktail chatter. I didn’t want our Fox family to think less of me.”

“What I have learned since is that HPV can lay dormant for decades,” she said. “And, then, when you least expect it, unmask itself. That’s what happened to me.”

Willis writes that the feeling was “all too familiar,” having been diagnosed with stage 3 cancer in the past.

In her column, she urged other “ladies” to be vigilant about taking preventative steps to detect a possible diagnosis ahead of time. She herself had simply uncovered the pre-cancer cells along with her doctor as a result of a routine Pap smear.

Scheduling regular health checkups could be the difference between life and death, Willis warned.

Her next step, she wrote, was a hysterectomy procedure before she can get back to financial reporting.

Ultimately though, Willis wrote that she was feeling “upbeat and optimistic.”

“I’m in front of the curve this time in my fight — being treated before an actual cancer has time to develop.”

“So, I’ll see you in a few weeks,” she added. “Don’t worry. We’ve got this. But do me a favor, take care of yourself and your family. HPV is a cancer you have tools to fight.”