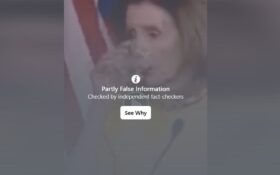 A controversial video that appears to show House Speaker Nancy Pelosi drunk — reportedly because the video has been edited — has gone viral on Facebook, getting over two million views in just a few days.

Now liberals are demanding the company take down the video, already flagged as “doctored” by the social media giant.

However, the video remains up as of Tuesday morning with a warning label.

According to the Facebook fact-checkers, the video was “digitally slowed down to make it appear as if Pelosi was intoxicated.”

The video was first posted on Facebook user Will Allen’s account Thursday with the caption, “This is unbelievable, she is blowed out of her mind, I bet this gets taken down!”

A spokesman for Facebook told CNN, “Following an incident over a year ago with a previous video of Speaker Pelosi, we took a number of key steps, making it very clear to people on Facebook when a third-party fact-checker determines content to be false and updating our policy to make explicit the kind of manipulated media we will remove. And, as always, when a video is determined false, its distribution is dramatically reduced and people who see it, try to share it, or have already shared it, see warnings alerting them that it’s false.”

While Facebook has so far refused to take down the doctored video, other social media companies have tried to delete the video from their platforms when asked by mainstream media companies like CNN.

You can see the controversial video (with warning labels) here —

This is unbelievable, she is blowed out of her mind, I bet this gets taken down!