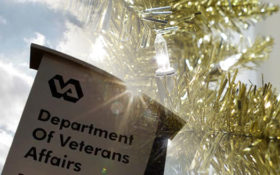 The War on Christmas 2016 has begun… and the very first causalities could be the brave Americans who fought in our REAL wars!

As workers everywhere attempt to put a little holiday cheer into their offices, a Christmas tree at a Veteran’s Administration office in Philadelphia had the PC police out in force.

A boss at the agency sent out an urgent memo saying a tree found in that department needed to go ASAP – or it would be tossed into the trash!

The office workers protested, and rightfully so.

Christmas-hating bosses don’t have a leg to stand on, not even in Barack Obama’s politically correct bureaucratic monstrosity.

There are no government rules that forbid celebrating Christmas in the workplace – only crazed left-wing managers trying to push their anti-Christian agenda who go too far, as may have been the case here.

And as the story blew up in the media, the agency quickly went into CYA mode… pretending it was all just a misunderstanding.

Now, n VA official told the Washington Times was a tree in a closed box – complete with its ornaments – and after the memo went out, someone in the office claimed it.

But even if that was the case, an urgent memo calling for the removal of a Christmas tree – and threatening to toss it out – shows exactly how screwy the agency’s priorities are.

“With veteran suicides at record highs, is this really the most pressing issue for the management at the Philly VA — one that demands a maximum effort and an all-employee, urgent email … to declare war on Christmas?” an official said to the Examiner.

Indeed, the same politically correct bureaucrats who have no problem tossing out Christmas trees while they lord over their agencies have are ignoring the very reason for their jobs.

And the VA is the worst example of that.

The agency has FAILED in its most basic duty, allowing America’s brave combat veterans to literally die waiting for the healthcare they earned through years of loyal service to our country.

And while veterans suffered, the agency wasted millions – including $20 million spent on overpriced artwork between 2004 and 2014, according to an ABC News investigation earlier this year.

Among the other items identified as wasteful spending by the VA? A $21,000 artificial Christmas tree!

They’d better hope it doesn’t get set up in the Philadelphia office.