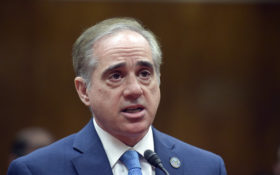 Veterans Affairs Secretary David Shulkin is warning the VA is “still in critical condition” despite efforts to reduce wait times for medical appointments and expand care in the private sector.

In a “State of the VA” report, the physician on Wednesday pointed to decades of disrepair and bloated bureaucracy in offering a blunt diagnosis: “There is a lot of work to do.”

Veterans can get “same-day” services at medical centers but are still waiting too long for new appointments — more than 60 days — at about 30 locations nationwide. Many primary care centers are understaffed or running out of space. Appeals of disability claims remain backed up with years of wait. Inventory systems at several VA facilities are woefully out of date, and employee accountability is “clearly broken.”

Shulkin said the department had about 1,500 disciplinary actions against employees on hold, citing legal requirements that it must wait at least a month before taking action for misconduct. That means people are being paid “for violating our core values,” he said.

“Our veterans and their families have benefited from our early success, but have suffered due to the failures of the past to effect real change,” Shulkin said.

Shulkin provided what he called a “top to bottom review” of the challenges ahead. It comes at a critical time. His biggest proposals for revamping the VA — and fulfilling the campaign promises of President Donald Trump — will need to be taken up soon by an increasingly polarized Congress if measures are to be passed by this fall.

The wish list includes an accountability bill to make it easier to fire VA employees, expansion of the Veterans Choice program of private-sector care and perhaps more money to stem veterans’ suicide.

Beginning this summer, veterans with “other than honorable” discharges from the military will be able to receive urgent mental health care. About 20 veterans take their lives each day.

“Nothing makes me lose sleep more than the veterans we are losing to suicide,” Shulkin said. He told a House panel last week that he would welcome more money, even if it’s not in Trump’s budget proposal.

Other efforts include an overhaul of information technology systems, plans to reduce 400 vacant buildings and 735 underutilized facilities, consolidation at VA headquarters in Washington and partnerships with local governments and the private sector.

Trump’s budget plan calls for a 3.7 percent increase in total VA funding, mostly to pay for rising costs of medical care. It specifically calls for $29 billion over the next decade for Choice, which allows veterans to seek outside medical care from private doctors.

To cover rising costs, the VA would cap the amount of educational benefits veterans could receive under the GI bill and halt “individual unemployability” benefit payments to out-of-work disabled veterans once they reach age 62. Major veterans’ organizations oppose such cuts, with the American Legion describing the trade-offs as “stealth privatization.” Veterans’ groups worry the Trump administration is seeking to expand Choice to the detriment of core VA programs.

Besides Choice, Shulkin said he was seeking to implement two other campaign priorities — a VA accountability office, established by executive order last month, and a White House hotline to receive veterans’ complaints. A “soft launch” of that hotline begins Thursday, with plans to be fully operational by Aug. 15.

Shulkin said he still needed the Senate to pass accountability legislation that would give him broader authority, such as lowering the evidentiary standard to fire employees.

The Associated Press reported this week that federal authorities were investigating dozens of new cases of possible opioid and other drug theft by employees at VA hospitals, a sign the problem isn’t going away after the VA announced “zero tolerance” in February. Since 2009, in only about 3 percent of the reported cases of drug loss or theft have doctors, nurses or pharmacy employees been disciplined.

The Senate votes on the bill June 6. “We need it now,” Shulkin said.