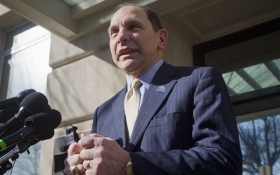 McDonald told the Senate Veterans Affairs Committee that he and other top leaders are turning the VA around, “providing more and better care than ever before” and holding employees accountable, including firing about 2,600 workers since he took office 18 months ago.

The VA has struggled to respond in the nearly two years since a scandal emerged in Phoenix over chronic delays for veterans seeking medical care, and falsified records covering up the long waits. Similar problems were soon discovered at VA medical centers nationwide, affecting thousands of veterans and prompting an outcry in Congress.

Despite the scandal, his “vision for VA (is) to become the No. 1 customer-service agency in the government,” McDonald said.

The agency has “a lot of work to do to reach that goal, but we are making progress,” he said, noting that VA increased the number of health care appointments by more 1.2 million last year, completing 96 percent of those within 30 days of clinically indicated dates or those preferred by veterans.

McDonald’s comments came as he outlined a 12-point plan he said would achieve “breakthrough outcomes” by the end of President Barack Obama’s term. The plan includes improving veterans’ access to health care, making it easier for veterans to navigate the complicated VA website, reducing chronic backlogs in disability claims and continuing to reduce veteran homelessness.

McDonald praised passage of a 2014 law intended to make it easier for veterans to receive private care, noting that VA authorized 12 million private appointments last year alone. The move to private care was intended to alleviate chronic delays many veterans face in getting treatment at the VA’s nearly 1,000 hospitals and outpatient clinics, or to make it easier for veterans who live far away from a VA health site.

“Negative news articles” published since the wait-time scandal broke out in Phoenix have hampered recruitment efforts and made it difficult for the VA to hire and retain qualified workers, McDonald said. Employment applications are down by about 75 percent compared to two years ago, he said.

Many Republican lawmakers have urged the VA to fire more workers to demonstrate what they say is sorely needed accountability at an agency hamstrung by career employees who face few consequences for wrongdoing. Lawmakers were flabbergasted last year after two high-ranking VA officials were demoted rather than fired amid allegations that they forced lower-ranking regional managers to accept job transfers against their will and then stepped into the vacant positions themselves.

Disappointment turned to anger after it was revealed that even the demotions were rescinded following a paperwork mix-up. “Frankly, this ineptness clearly illustrates that VA can’t even slap a wrist without missing the wrist,” said Rep. Jeff Miller, R-Fla., chairman of the House Veterans Affairs Committee.

Earlier this month, the VA said that the two senior executives, Diana Rubens and Kimberly Graves, were demoted to general workers within the Veterans Benefits Administration.

Senators appeared generally sympathetic to McDonald’s message, in contrast to often contentious hearings in the House.

Sen. Joe Manchin, D-W.Va., said McDonald has a tough job. Reforming the VA “is like turning the Titanic,” he said.