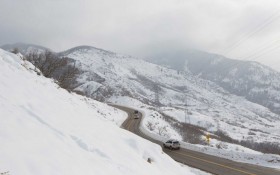 Sarah Crenshaw was edging along a familiar mountain road in Utah when her SUV hit a patch of black ice and slid over a precipice.

“I started praying, ‘Don’t let me die on Christmas,'” she later told the Standard-Examiner.

Crenshaw, 48, survived the 320-foot tumble into a ravine on the morning of Dec. 20, escaping with only minor injuries. She recounted the harrowing experience in an interview this week with the Ogden newspaper.

Crenshaw had driven the stretch of road hundreds of times and was being cautious in that morning’s foggy snowstorm. She had her Jeep Liberty in four-wheel drive and low gear, and a Weber County Sheriff’s Office report estimated she was going only about 20 mph.

“I was creeping around the corner, and it was like someone sprayed black ice,” Crenshaw said. “The next thing I know, my car was sliding toward the embankment, but sliding parallel. I was still aimed in the right direction but just slid off and over the edge, and I could see it coming.”

She couldn’t see past the snow but knew she was going off something steep. So Crenshaw tucked in her elbows, bowed her head and tried not to panic.

The Jeep rolled a number of times, smashing into boulders and trees. Its convertible top was shredded.

“Every time it rolled, I saw a boulder and something crunched, and trees were coming in,” she recalled. “It seemed like it went on forever.”

But Crenshaw suddenly felt calm when the Jeep came to a stop. Sitting in the quiet SUV amid falling snow, she remembered something her late grandfather often told her: “Sarah, at least you stuck the landing.”

“I started laughing. Yeah, I stuck the landing.”

Another driver saw her vehicle go off the cliff and called 911. A rescuer climbed down the mountain to reach her.

Crenshaw was taken to an Ogden hospital, where she was treated and released later that day. She had only a minor cut, black eyes, scratches and bruises.

And one week after the crash, Crenshaw was back on North Ogden Canyon Road. She has driven it almost daily for the past eight years to care for her elderly parents, her older sister, and their horse and llama.

“I’m not going to let myself be afraid of it. … Every time you drive it, you see something different — the wildlife, the beauty,” Crenshaw said. “It might be a scary road, but if you’re not stupid and you drive like you’re supposed to, you’re OK.

“I just would not suggest doing it in a snowstorm.”