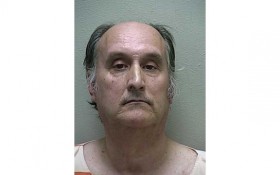 A 60-year-old church usher was arrested in Florida on Sunday after Blessed Trinity Catholic Church officials suspected him of stealing from the church’s offerings.

After reporting the suspicion to the Marion County Sheriff’s Office, deputies installed surveillance cameras in the church.

The video footage allegedly shows usher Mario Condis stealing money during each mass while the patrons have their eyes closed and heads bowed in prayer.

When detectives took Condis into custody, they found $350 in his pockets, which he claimed was his. He posted a $3,500 bond Sunday evening and was released.

See the video of this dishonest usher allegedly robbing from the unknowing church patron’s donations here.