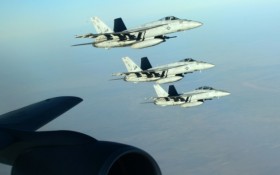 U.S. officials say there have been about 20 airstrikes against Islamic State militants in eastern Afghanistan in the past three weeks, as the U.S. expands its fight against the insurgent group beyond Iraq and Syria.

The strikes come in the wake of a decision by the Obama administration to give the Pentagon the authority to conduct airstrikes against IS in Afghanistan. The group’s numbers there continue to grow.

Army Brig. Gen. Wilson A. Shoffner says there are 1,000 to 3,000 Islamic State fighters in eastern Afghanistan trying to establish a base.

Shoffner declines to say how many airstrikes the U.S. conducted in the east, but other U.S. officials say it’s around 20. The officials aren’t authorized to discuss the numbers publicly so spoke on condition of anonymity.