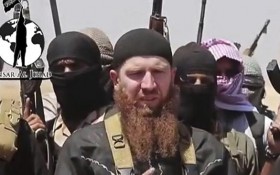 It’s a message that’s starting to resonate among ISIS fighters who are beginning to desert the front lines in droves: Wage jihad against the United States, and our Air Force will find you.

That’s what happened to top Islamic State commander and feared ethnic Chechen jihadi fighter Omar al-Shishani, who died Monday of wounds suffered in a U.S. airstrike in Syria, a senior Iraqi intelligence official and the head of a Syrian activist group said.

Al-Shishani, who was wounded in the airstrike earlier this month, died outside the Islamic State group’s main stronghold of Raqqa in Syria, the two sources said.

The red-bearded ethnic Chechen was one of the most prominent and senior ISIS commanders, who earlier served as the group’s military commander for the territory it controls in Syria. He later became the commander of the group’s ground forces, according to Hisham al-Hashimi, an Iraqi scholar and author who closely follows the group.

According to Rami Abdurrahman, of the Britain-based Syrian Observatory for Human Rights which tracks the Syrian conflict through a network of activists on the ground, after al-Shishani was wounded, ISIS “brought a number of doctors to treat him, but they were not able to.”

Abdurrahman said al-Shishani died in a hospital in the eastern suburbs of Raqqa. The Iraqi intelligence official, who spoke on condition of anonymity as he was not authorized to talk to the media, said the ISIS commander was buried in Deir el-Zour on Tuesday.

Al-Shishani, whose real name is Tarkhan Batirashvili, was an ethnic Chechen from the Caucasus nation of Georgia, specifically from the Pankisi Valley, a center of Georgia’s Chechen community and once a stronghold for militants.

A U.S. airstrike targeted al-Shishani on March 4 near the town of Shaddadeh in Syria, Pentagon Press Secretary Peter Cook told reporters in a statement last week.

Al-Shishani “had been sent to Shaddadeh to bolster ISIL fighters following a series of strategic defeats,” Cook said in the statement, using an alternative acronym for the Islamic State group.

The spokesman for the U.S.-led coalition, U.S. Army Col. Steve Warren said on Tuesday that the coalition was able to “assess that he is dead” and that it “got the word Monday morning.”

Warren described al-Shishani as a “very important figure,” in the Islamic State group, who was hit as part of a stepped-up campaign of U.S.-led airstrikes targeting ISIS leadership.

Last week, Waren told reporters that the airstrike that targeted al-Shishani was part of a series of stepped-up coalition strikes targeting ISIS leadership.

Al-Shishani was in the area of Shaddadeh “along with about a dozen other fighters who were in one spot … and we struck it,” Warren said at the time.