US to restore regular commercial flights with Cuba - The Horn News 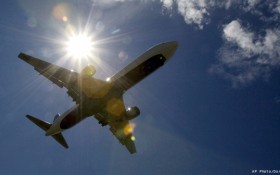 The United States and Cuba are close to an agreement on restoring regularly scheduled, commercial flights between the countries, a senior American diplomat said Tuesday, as talks on the matter were ongoing.

Jeffrey DeLaurentis, who heads the U.S. embassy in Havana, described an aviation deal as one of several in reach for the former Cold War foes in their wide-ranging discussions to improve relations. The Obama administration has been trying to wrap up an agreement on flights before the year’s end.

“We have made good progress and come a long way,” DeLaurentis told reporters on a conference call two days before the one-year anniversary of the announcement by Presidents Barack Obama and Raul Castro that they were ending a half-century of U.S.-Cuban enmity.

“Our two countries have engaged in a historic dialogue on a wide range of issues,” he said. “We have discussed concrete objectives on civil aviation, direct transportation of mail, environment, regulatory changes and counternarcotics. And we have either reached understandings on those topics or continue to narrow our differences in ways that suggest we could soon conclude such understandings.”

Right now, American and Cuban travelers must fly on charter flights that are complicated to book, rarely involve an online portal and often force prospective travelers to email documents and payment information back and forth with an agent. Those flying sometimes must arrive at the airport four hours in advance; strict baggage limits apply.

U.S. and Cuban officials are negotiating the logistics of commercial airline routes this week, and may be able to make an announcement afterward.

A deal would be timely. Authorized American travel to the island is up 50 percent this year, DeLaurentis said, buoyed by significant expansion in cultural and educational programs. Among Obama’s regulatory changes this year was one permitting Americans participating in such programs to visit Cuba without first applying for Treasury Department permission.

And it would build on last week’s declaration that direct mail service would restart after a 52-year interruption. The governments had been speaking about restoring a postal link since Obama entered office, but those talks stalled when Cuba imprisoned U.S. contractor Alan Gross. He was freed in a prisoner exchange that sparked last year’s declaration of detente.

On other issues, however, the U.S. and Cuba remain far apart.

DeLaurentis cited the billions of dollars in competing property claims, the status of fugitives in both countries, and Cuban respect for human rights as outstanding matters of disagreement. On these, he could only say that Washington and Havana “have started the process of exchanging views.”

The administration also has been trying to get Cuba to make it easier for Cuban citizens to start private companies, access information online and benefit from eased American rules for commerce, even if the U.S. economic embargo on the island remains in effect. Only Congress can eliminate the embargo.

“More could be done on the Cuban side to take advantage of new openings,” DeLaurentis said.