US to N. Korea: Bring it on! Air Force sends message with B-2 bombers - The Horn News 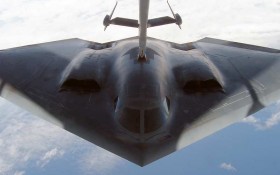 The U.S. says it has dispatched three B-2 stealth bombers on a training mission to the Asia-Pacific region amid growing tensions with North Korea.

The deployment was announced Wednesday by U.S. Strategic Command, which is responsible for U.S. nuclear forces. B-2 bombers are capable of launching nuclear as well as conventional weapons. They are based at Whiteman Air Force Base in Missouri.

Strategic Command said the bombers will conduct training with the Australian military during the deployment, which amounts to a show of force at a time of mounting tensions with North Korea. North Korea threatened pre-emptive nuclear strikes after the United States and South Korea began large-scale war games this month.

Strategic Command declined to say where the bombers will be operating from, or for how long.