US-led NATO forces send a message to Putin – BACK OFF! - The Horn News 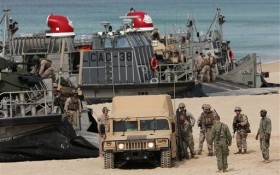 NATO is putting on its most fearsome display of military might in over a decade, a choreographed large-scale movement of soldiers, ships and planes meant to hone and test its capabilities as well as transmit a clear signal to Russia and other real or possible foes.

“We’re sending a message to any potential adversary: NATO is ready to rapidly deploy armed forces and we can do it on land, sea and air,” alliance secretary-general Jens Stoltenberg told Spain’s ABC newspaper.

For three weeks starting Oct. 21, more than 36,000 personnel from all 28 NATO allies and eight partner nations, as well as over 160 aircraft and 60 warships, are scheduled to take part in exercises across a broad swath of southern Europe stretching from Portugal to Italy.

The No. 1 objective of the maneuvers, codenamed Trident Juncture, is to ensure NATO’s beefed-up Response Force is up to the job, and that the United States and its allies can respond promptly and in unison to a crisis.

For more than a year, the 28-nation alliance has been in the throes of a major makeover, largely in response to Russia’s annexation of Crimea and support for a pro-Russia separatist insurgency in eastern Ukraine, but also to better meet the new types of security threat represented by Islamic State and other armed extremist Muslim organizations active in the Middle East and North Africa.

“The last time NATO regularly held exercises of this magnitude, we were in the midst of the Cold War, facing the Soviet threat,” Alexander Vershbow, Stoltenberg’s deputy and the ranking American civilian at NATO, said at last month’s official opening of Trident Juncture at Trapani air base in Sicily.

“Now, we have a far more unstable and potentially more dangerous situation,” said Vershbow. “In this new world, NATO’s allies and partners must be able to move quickly and act decisively.”

On Wednesday, barring foul weather, more than 500 paratroopers from the 82nd Airborne Division, based at Fort Bragg, North Carolina, are expected to stage a massive parachute airdrop at a training area near Zaragoza in northeastern Spain after flying directly from the U.S. aboard C-17 Globemaster III transports.

For 60 minutes, 1,800 troops from 12 NATO member nations, backed by helicopters and tanks, will also simulate an attack against an imaginary enemy.

The displays, to which NATO top brass and civilian leaders have been invited, are meant to showcase the alliance’s military muscle and the Transatlantic bond it was founded to safeguard. German Army Gen. Hans-Lothar Domroese, Trident Juncture’s commander, has likened NATO’s biggest multination exercise since 2002 to the training needed to guarantee that exceptional football players perform as a winning team.

And NATO has said it wants other countries to witness what it’s doing. It said three Russian inspection teams arrived in late October to examine Trident Juncture activities in Italy, Portugal and Spain, and that “in the interest of promoting transparency,” observers from 11 other countries, ranging from the United Arab Emirates to Mexico, have also been invited.

“This exercise is defensive in nature, the scenario and adversary are fictional,” Domroese said in a statement. “We hope that by inviting observers we can help to build trust and confidence.”

So far, the Russians appear unpersuaded. Alexander Grushko, Moscow’s permanent representative to NATO, said in an interview with the Rossiya-24 television channel on Monday that the “key process underway” these days at NATO is military planning he said indicates the U.S.-led alliance is moving “from the policy of partnership to the policy of containing Russia.”

The exercises, which end Nov. 6, will test the new, ultrafast-response “spearhead force” of 5,000 ground troops that has been created to reinforce NATO allies under threat in as little as two days. At a media briefing in July, Domroese said one real-life departure from previous NATO war games will be Trident Juncture’s ability to throw a number of problems simultaneously at soldiers, sailors and airmen and to demand they find solutions.

The war games, which took two years of planning, were rejiggered to add areas where many NATO officials say the alliance has been dangerously deficient, including defending against cyberattack and the use of social media to deceive public opinion.

Even if Trident Juncture is deemed a success, some observers say NATO must do more to adapt. Retired Adm. James Stavridis, dean of The Fletcher School of Law and Diplomacy at Tufts University and former NATO supreme allied commander, said he has been discouraged by the alliance’s “tepid response to Syria,” its inadequate measures taken for cyberdefense and the continuing reluctance of many European allies to spend more on their militaries.

On the plus side, Stavridis said, are NATO’s response to Russian military activity on the alliance’s perimeter, creation of the spearhead force and the accelerated program of training and exercises, including Trident Juncture.

When it comes to NATO’s success so far in remaking itself, the former alliance supreme commander said, “if you want a letter grade I’d say a B minus.”