Not in my state! 26 governors refuse Syrian migrants - The Horn News 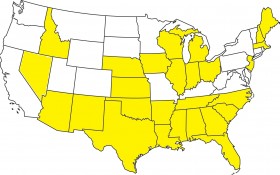 More than half of all U.S. states are revolting against a White House plan to settle thousands of Syrian migrants. They have declared that the refugees will not be welcome in their states until security issues are cleared up.

Even some Democrats are breaking ranks, with New Hampshire Governor Maggie Hassan and Boston Mayor Marty Walsh joining the calls for a complete freeze of the process until the migrants can be properly vetted for possible links to ISIS and other terror groups.

The governors of these states are responding to heightened concerns that terrorists might use the refugees as cover to sneak across borders. Authorities have said that a Syrian who may have been posing as a migrant was one of the terrorists involved in this weekend’s attacks in Paris.

The issue looms as a sudden and unexpected challenge to new House Speaker Paul Ryan of Wisconsin, who faces a Dec. 11 deadline to pass a package of spending bills or risk a partial government shutdown. The legislation was already tricky because of the potential for policy fights on issues like Planned Parenthood and the environment, and now some conservatives want to add language requiring congressional approval of any refugee plan.

That could allow Republicans to block President Barack Obama’s goal of bringing 10,000 more Syrian refugees to the U.S. during the current budget year.

The U.S. State Department said the refugees would be spread across the country. Republican presidential candidates have criticized the plan.

The U.S. has admitted more than 2,000 Syrian refugees since Oct. 1, 2011 and the process for entering this country as a refugee is lengthy.

Here’s a look at what the governors of several states had to say about the refugee resettlement plan.

Republican Gov. Robert Bentley announced Sunday that he would refuse Syrian refugees relocating to the state, saying: “I will not stand complicit to a policy that places the citizens of Alabama in harm’s way.” Bentley’s news release said the Alabama Law Enforcement Agency was diligently working with federal officials to monitor any possible threats.

In a statement issued Monday, Gov. Bruce Rauner said the state will “temporarily suspend accepting new Syrian refugees and consider all of our legal options pending a full review of the process by the U.S. Department of Homeland Security.”

Saying he wants to protect residents of his state in the wake of terrorist attacks in Paris, Gov. Terry Branstad said he wants more information from the federal government about where people are being placed and the vetting process.

Republican Gov. Mike Pence announced Monday that he was ordering state agencies to suspend the relocation of any more Syrian refugees to the state until he received assurances from the federal government that proper security measures had been taken.

Gov. Bobby Jindal — a GOP presidential contender — said he wants more information from the White House “in hopes that the night of horror in Paris is not duplicated here.” Jindal sent a letter to the White House on Saturday, demanding to know how many Syrian refugees have been resettled in his state. He also wants to know the extent of background screening before Syrians entered the United States as well as what monitoring would be done once the refugees make it to Louisiana.

Gov. Charlie Baker says he’s opposed to allowing more Syrian refugees into Massachusetts in the aftermath of the terrorist attacks in Paris and that he wants to know much more about the federal government’s vetting process before allowing them into the state. Democratic Boston Mayor Marty Walsh also says he wants to know about how the federal government screens refugees.

Gov. Rick Snyder had bucked many fellow Republican leaders by welcoming refugees to Michigan, which has a large Arab-American population. But he said Sunday that the state is postponing efforts to accept refugees until federal officials fully review security procedures and clearances. Snyder said that while he is proud of the state’s history of immigration, its “first priority is protecting the safety of our residents.”

Gov. Phil Bryant said Monday that he’s trying to find out if there are any plans by the federal government to relocate any Syrian refugees in the state and if there are the Republican said he will “do everything humanly possible” to stop it.

Gov. Greg Abbott on Monday ordered Texas’ refugee resettlement program not to accept any more Syrians in the wake of the Paris terrorist attacks. In a letter to Obama, the Republican also urged scrapping federal plans to accept more Syrian refugees into the country as a whole. He said the federal government can’t perform “proper security checks” on Syrians.