US General: Obama wrong on Afghanistan - The Horn News 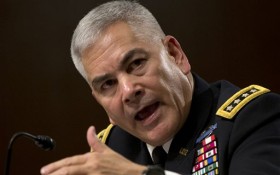 The top U.S. commander in Afghanistan testified before Congress Tuesday, and warned that President Obama’s planned draw-down of U.S. troops could be a disaster waiting to happen.

Should Obama continue to press his political agenda on the battlefield, Afghan forces could even fracture in the face of renewed Taliban attacks.

Gen. John Campbell went before Congress to push that Obama revise his plan and keep more than 1,000 U.S. troops in the country beyond 2016. His appearance came just days after a deadly U.S. airstrike mistakenly struck a hospital during fierce fighting in the north.

Campbell told Congress that conditions on the ground have changed since Obama announced his plan in 2014 to cut the current U.S. force of 9,800 to an embassy-based security contingent of about 1,000 in Kabul post-2016.

Campbell said that Afghanistan remains engaged in a violent battle against the Taliban, military operations in Pakistan have pushed fighters, including those linked to al-Qaida, into eastern and northern Afghanistan and the emergence of Islamic State fighters has further complicated the conflict.

Campbell, the top commander of U.S. and allied forces in Afghanistan, said that dropping to 1,000 troops would leave the United States with limited ability to train and assist the Afghan forces and even less capacity to conduct counter-terrorism operations. He said the different options he has provided to his superiors are for troop levels beyond a normal embassy presence of about 1,000.

When Sen. Angus King, I-Maine, asked Campbell if he thought the president should revise his troop withdrawal plan, Campbell replied: “I will stomp my foot. Yes, sir.”

In his opening remarks to the Senate Armed Services Committee, Campbell offered details about the airstrike on a medical clinic that Doctors Without Borders ran in Kunduz.

The airstrike occurred as Afghan forces were retaking Kunduz from the Taliban. The insurgents staged a surprise attack from multiple sides of the city and held it for three days before Afghan security forces recaptured it with help from the U.S.-led coalition.