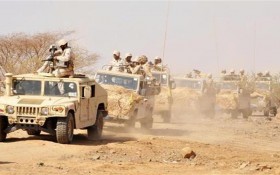 Could this be the end for the Islamic State? A Saudi military spokesman says the kingdom is ready to send ground troops to Syria to fight ISIS face-to-face, provided coalition leaders agree during an upcoming meeting in Brussels.

Brig. Gen. Ahmed Asiri said on Thursday that Saudi Arabia has taken part in coalition airstrikes against ISIS since the U.S.-led campaign began in September 2014, but would now provide ground troops.

The United States is scheduled to convene a meeting of defense ministers from countries fighting ISIS in Brussels this month.

“We are determined to fight and defeat Daesh,” Asiri said, using the Arabic acronym for ISIS. He didn’t elaborate on how many troops the kingdom would send. Saudi Arabia is deeply involved in Yemen’s civil war, where it is fighting Iranian-backed Shiite rebels.