US Air Force rains thunder on ISIS - The Horn News 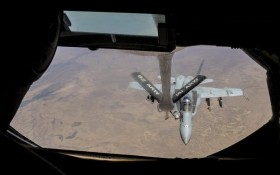 The U.S. Air Force doesn’t mess around. If you chant “Death to America” and attack us or our allies, you’d better learn to duck.

The Turkish military said Monday that artillery shelling and air attacks by the U.S.-led coalition struck numerous ISIS positions in Syria and killed a total of 63 Islamic terrorists.

Four drones deployed from the Incirlik air base, a launching point for U.S.-led coalition forces in southern Turkey, took part in the operation and killed 29 militants.

The air strikes were informed by intelligence gathered by the Turkish army, the private Dogan news agency reported.

The remaining 34 ISIS fighters were “neutralized” by rocket fire and artillery shelling from Turkey, according to Anadolu Agency.

The offensive started on Sunday when four rockets fired from Syria hit the Turkish border town of Kilis and wounded eight people.

The Turkish army typically responds to fire from Syria in line with its rules of engagement.

In the past year, Turkey has also witnessed suicide bombings linked to ISIS as well as attacks linked to Kurdish militants.

The latest came Sunday, when a car bomb detonated outside a police station in the southern city of Gaziantep, near Syria. There was no immediate claim of responsibility for that attack but anti-terrorism units raided 20 Gaziantep addresses overnight in search for suspects.