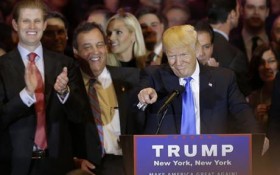 Billionaire Donald Trump declared himself the presumptive Republican nominee after huge victories in all five contests Tuesday. It is a presumptuous label but one he might grow into sooner than expected if he can pull off more primaries like the latest round.

The Republican billionaire’s strong performance yielded a rich delegate bounty that improved his odds of clinching the nomination during the 10 GOP races left on the calendar — crucially avoiding a struggle for a majority at a contested July convention.

But while their hope may be fading, there’s still a chance for Republican presidential rivals Ted Cruz and John Kasich if they can stop Trump from accumulating enough delegates.

Clinton, in contrast, has broken well into the clear. With her wins Tuesday in Connecticut, Pennsylvania, Delaware and Maryland, she is 90 percent of the way toward clinching the Democratic nomination. Trump, who won the same states plus Rhode Island, is about 77 percent of the way.

The Pennsylvania race was an enigma wrapped in the mystery of the GOP contest. Most of the GOP delegates — 54 — were directly elected by voters, with their names listed on the ballot but no information about which candidate they support and no obligation for them to have to line up with one of them. Trump won 17 delegates allocated to the statewide winner of the popular vote.

Where the rest will go is not known, and that could be big news if Trump gets within range of a majority during the primaries but stays short of it.

After Tuesday, a new alliance will make its debut as John Kasich steps back in the May 3 Indiana primary to let Ted Cruz soak up the anti-Trump vote. In return, Cruz will essentially let Kasich have at Trump in New Mexico and Oregon later in the calendar. It’s a late-in-the-game compact to crystallize anti-Trump sentiment instead of having the voters who don’t like him split between two other choices.

It’s unclear how far each partner in the arrangement will go to clear the path for the other. They are both pulling back on campaign events in the states they are supposedly ceding to the other. But Kasich said people in Indiana who like him ought to vote for him anyway.

Overall, Trump beefed up his delegate numbers at least to 950, with 1,237 the magic number to clinch, so he needs as many as 287 in remaining contests. Cruz had at least 560 delegates; Kasich, 153.

In short, Trump has a distinct path to winning the nomination before July — though there still remains some room for missteps.