Get back! Paul McCartney turned away from party for not being VIP enough - The Horn News 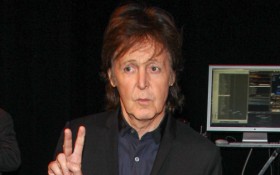 Following the Grammy Awards Monday night, celebrities continued the party at a variety of post-award shows. Rapper Tyga and reality TV star Kylie Jenner hosted an after party at a nightclub called Argyle.

When Beatle Paul McCartney, last year’s album of the year winner Beck, and Foo Fighters drummer Taylor Hawkins showed up at the door, they were denied entry!

TMZ captured the awkward encounter on camera, as McCartney questioned, “How V.I.P. do we gotta get?”

When TMZ asked Tyga and Bow Wow about turning away the legendary musician Bow Wow suggested, “Maybe it’s the fact that we’re younger than Paul… and we really club and we really go out.”