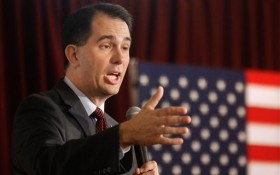 Union leaders are livid with Republican presidential candidate Scott Walker.  Walker’s campaign has struggled to gain ground nationwide, so it appears he is hoping to pull it off the mat by taking on unions — a familiar foe for the Wisconsin governor — in a sweeping plan to upend pillars of organized labor nationwide.

In an interview with The Associated Press on Monday, Walker said no one should be surprised.

“I think people would be shocked if the governor who took on big government special interests wouldn’t do it at the federal level,” Walker said by telephone as he waited to board a plane to Nevada.

In his speech spelling out his “Power to the People” proposal at a Las Vegas manufacturer, Walker said he didn’t back down against union protesters in Wisconsin and he was ready for the national fight.

“Collective bargaining is not a right, it is an expensive entitlement,” he said, speaking with his sleeves rolled up, in between a pair of oversized construction vehicles and in front of a large American flag.

Walker’s move comes as he tries to gain traction heading into the second GOP presidential debate, being held Wednesday in California. A weak performance in the first debate and a series of missteps has contributed to his tumble from the polls after his strong start months ago.

“I think it’s a good move,” said Richard Schwarm, a former GOP chairman in the early caucus state of Iowa who is uncommitted in the 2016 race. “It gets a lot of attention on him in the next day or two.”

Walker won nationwide recognition for eviscerating public-sector unions in Wisconsin and becoming the first governor to prevail in a recall election, which followed huge protests against his anti-union steps. Now he’s proposing to go national with an effort to curb union clout.

“It’s reminding people of the reason they liked us in the first place,” Walker said in the interview, brushing aside with laughter a question about whether the move was a sign of desperation.

Labor law experts were taken aback by the scope of Walker’s proposal, which seeks to undo decades of law and would gut the landmark National Labor Relations Act — adopted in 1935 and signed into law by President Franklin D. Roosevelt at the height of the Great Depression.

“I’ve never seen anything like this,” said Ann Hodges, a professor at the University of Richmond who has studied labor law for more than 40 years.

Walker’s plan also calls for prohibiting the automatic withdrawal of union dues to be used for political purposes and forbidding union organizers from accessing employees’ personal information, such as their phone numbers.