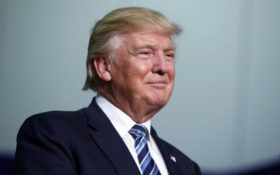 Stocks are soaring, jobs are staying in America and deals are being made as President-elect Donald Trump prepares to take office.

But there are still liberal whack jobs who are ignoring the clear evidence of a growing Trump economy.

President-elect Trump “should have come out and tried to justify his numbers.” United Steelworkers 1999 President Chuck Jones told CNN.

While Trump’s efforts undeniably saved jobs, Jones is unhappy with how the exact amount was reported.

The mainstream media has failed to notice that Jones’ union endorsed Democratic presidential candidate Hillary Clinton. But Trump has made some observations of his own, tweeting:

Chuck Jones, who is President of United Steelworkers 1999, has done a terrible job representing workers. No wonder companies flee country!

If United Steelworkers 1999 was any good, they would have kept those jobs in Indiana. Spend more time working-less time talking. Reduce dues

It’s something Democrats and union bosses, dependent on workers loyalty, don’t want Americans to see — saving American jobs is just the beginning of Trump’s blossoming economy. His promises of less regulation and increased infrastructure spending have excited Corporate America, and have given down-on-their-luck workers a glimpse of the economy to come.

And it has left the overpaid union chiefs furious.

“I’d be more than happy to bring back the employees we’ve been forced to lay off during that depressive period, CEO Mario Longhi said, continuing that it, “could be close to 10,000 jobs.”

Businesses from coast to coast are confident that Trump with improve the economy, and that faith in the President-elect is reflected in their investments.

The Dow Jones industrial average and Standard & Poor’s 500 indexes soared Wednesday to their biggest gains since the presidential election and set all-time highs.

The transportation sector reached an all-time high for the first time in two years. Julian Emanuel, an equity strategist for UBS, said investors see the record as a sign that businesses will start spending more, which would bolster economic growth.

Trump proved his actions have a great effect on the stock market when he criticized Boeing for an outrageously expensive Air Force One deal and the aircraft manufacturer’s stock price dipped.

Following his criticism of Boeing, Trump continued exemplifying the art of the deal. He met with Masayoshi Son, the CEO of telecommunications company SoftBank, and announced —

Any union leader or critic that claims Trump will be damaging for the economy is ignoring the clear evidence in front of them. The president-elect hasn’t even made it to the oval office, and yet the economy is already making huge strides because of his actions.

Imagine the massive improvements he can make with the power of a presidential pen and the bully pulpit.