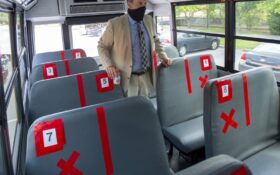 This weekend the country takes time off from work to celebrate the Thanksgiving holiday. But for many students, the school year has never really begun. They’ve been stuck at home with “virtual” school lessons—often forcing one of their parents to miss work, as well.

A new study shows the main reason schools close is not how severe an outbreak of the coronavirus an area’s had: It’s how strong the teachers unions are and how much the area hates President Donald Trump.

The report surveyed school districts that opened this summer with traditional classroom learning vs. those that forced children to attend virtual schools—and found that they had almost identical rates of COVID-19 infections.

The big difference, the report found, was how much sway liberals had in the school district.

Schools that had a union, like the far-Left National Education Association and the American Federation of Teachers, were more than four times more likely to go to school online than those without a labor union.

And the report found one thing tipped the scales even more than teachers unions: how much the school district’s voters supported Donald Trump in the 2016 election. The higher percentage of Trump voters in a district, the more likely schools would open their doors, according to the study from the Wisconsin Institute For Law & Liberty (WILL).

The sheer political calculation of school officials is “the most surprising aspect to me,” said Will Flanders, who wrote the WILL study. “I thought that union presence and political ideology probably would play a role but I didn’t expect the rate of coronavirus in the area to play no significant role.”

A nationwide survey of school reopenings completed in September came to identical conclusions. As a matter of fact, authors Corey DeAngelis and Christos Makridis write, union influence was so important you could put it down to a scientific formula.

“Using data on the reopening decisions of 835 public districts covering about 38 percent of all students enrolled in K-12 public schools in the country, our study finds that school districts in places with stronger teachers’ unions are much less likely to offer full-time, in-person instruction this fall,” they wrote. “A 10 percent increase in union power is associated with a 1.3 percentage-point lower probability of reopening in person.”

At the same time, many large school districts are meeting in Republican-controlled states where lawmakers insisted the schools be open.

In between these two studies, a third study also put the finger on unions and politics.

While the adults are playing politics, children across the country are falling behind in school and reporting mental health issues.

It’s a widespread problem. As of last month, 24 of the nation’s 50 largest school districts still hadn’t opened up their schools to large classes. 11 of those schools were still teaching in 100% virtual classrooms.

At the time, less than 1% of students or teachers had caught the Chinese virus, according to a survey from Brown University.

It’s a good deal for teachers and union representatives, who get to work from home and minimize their exposure to COVID-19. But it’s already hurting the people the schools are supposed to serve: the kids.

“We are losing them,”Atlanta Schools Superintendent Lisa Herring told The Washington Post. “We have a responsibility to start to do as much as we can, as safely as possible, to not completely lose them before the close of this semester.”

Children, sitting alone inside their home all day, say it’s taking a toll on their happiness. About 30% of parents say their kids are suffering emotional or mental health issues because of the loneliness brought on by virtual-only classrooms.

“The older kids were saying ‘This is hell,’” a New Jersey dad told USA Today. “My kids feel isolated, and they can’t keep up, and they’re struggling with it.”

Children’s visits to the emergency room to deal with mental health issues has increased since mid-March by “24% among children aged 5–11 years and 31% among adolescents aged 12–17 years,” according to the CDC.