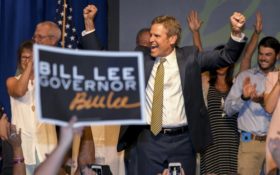 Businessman Bill Lee defeated three other Republicans in a bruising primary for Tennessee governor Thursday, setting the stage for a competitive fall contest against former Nashville Mayor Karl Dean, who cruised to the Democratic nomination.

Lee spent just $7 million through late July, a third of what former state economic development commissioner Randy Boyd shelled out and half of what U.S. Rep. Diane Black spent. In all, the Republican race to succeed term-limited GOP Gov. Bill Haslam added up to a record-shattering $45 million-plus in spending.

Throughout his campaign, Lee touted himself as the race’s only conservative outsider, focused heavily on his relationship with Jesus Christ and talked about his cattle farm and his family business. He rode a tractor across the state to draw focus on rural issues.

“I am someone who is not a politician, but I do have a vision for Tennessee to lead the nation,” Lee told supporters during his victory speech.

Once Boyd and Black started hitting him in TV ads, Lee banked on a different approach to avoid overtly blasting his opponents. Lee ran ads saying attacks against him aren’t what a leader does and some people will say or do anything to get elected. The Franklin businessman argued he had three politicians attacking him because he was winning.

“We didn’t go down that road and I’m not gonna start now,” Lee said of the attacks.

On the Democratic side, Dean had a huge advantage in campaign cash and outspent Fitzhugh $4.4 million to $984,800. The Democratic race was mostly cordial, aside from a few squabbles.

Dean will put forward his message of bipartisanship to try to peel off moderate Republicans and independents in a state that favored President Donald Trump by 26 percentage points in 2016. He said that though places like Nashville are thriving, many people in other areas struggle because of a lack of jobs, hospital closings and high poverty.

“There is still work that we need to do for the forgotten Tennessee, and that’s where my energies will be,” Dean said.

The GOP candidates aimed to paint themselves as most devoted to Trump and his tough-on-immigration priorities, questioning each other’s allegiance to the president and his policies down the homestretch of a close race.

Each candidate added millions of dollars of personal wealth to their campaigns, amounting to $40 million total. Lee used the third-least amount of personal cash in the field, having loaned his campaign $5.3 million compared to Boyd’s personal contributions totaling $19.5 million and Black’s $12.3 million infusion of wealth.

Dean has tapped into about $1.5 million total of his own money.

Lee is the chairman of his family business, Lee Company, a $225 million mechanical contracting, facilities and home services firm with more than 1,200 employees.

Black was considered the early leader in the race, but struggled down the homestretch amid a TV ad war with Boyd in which she was labeled “D.C. Diane.”

She was on pace to finish third despite Vice President Mike Pence tweeting his support for Black last week.

Trump stopped short of endorsing Black, but he kept the Gallatin lawmaker by his side and praised her during several key news events. She earned Trump’s praise in part by pushing through his tax law while she served as the House Budget Committee chairwoman. She made that role a focal point of her campaign and TV ads.

“Sometimes, God just sets a different course for you than what you set for yourself,” Black said in her concession speech.