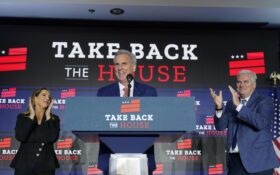 Control of Congress hung in the balance Wednesday.

Former President Donald Trump insisted on social media that he’d had “A GREAT EVENING.” Current President Joe Biden, meanwhile, spent the night calling Democrats to congratulate them on their wins.

The Democrats scored unlikely victories in a series of competitive races for Congress, while Republicans enjoyed more success further down the ballot.

But with votes still being counted, nothing is certain yet.

SPLIT NIGHT — BUT TRUMP IS HAPPY

Tuesday was not exactly the “red wave” that Republican voters were hoping to see. But Trump himself called the night a success based on the number of endorsed candidates that won.

“174 wins and 9 losses, A GREAT EVENING, and the Fake News Media, together with their partner in crime, the Democrats, are doing everything possible to play it down. Amazing job by some really fantastic candidates!” Trump said on his Truth Social.

Going into the midterm elections, the Senate was split 50-50, with Democrat Vice President Kamala Harris serving as the tiebreaking vote.

The Democrats are currently leading… but they haven’t won yet.

The nation is still waiting on results from the Senate’s other close races, like the ones in Nevada and Georgia.

First-term Sen. Catherine Cortez Masto, D-Nev., was expected to lose re-election in the polls taken before last night, and she’s currently trailing her Republican challenger, Attorney General Adam Laxalt. However, Cortez Masto is leading in some projections of the final results, as of Wednesday morning.

In Georgia, a candidate must win a majority — not simply a plurality — in order to avoid a runoff election. Right now, incumbent Sen. Raphael Warnock, D-Ga., is leading Republican Herschel Walker, but he looks unlikely to receive more than 50 percent of the vote.

In other words, the Senate may remain anyone’s prize until next month, the likely date of a runoff election in Georgia.

The Senate suffered a similar fate in 2020. The chamber was split 48-50 until the red losses during Georgia’s two runoff elections.

A Republican-controlled Senate would likely hobble the president’s ability to make judicial appointments.

With votes still being counted across the country, Republicans are likely to win control of the House which would likely trigger a spate of investigations into Biden and his family.

But the Democrats have been emboldened after holding some competitive seats… and they’ve and raised questions about the size of Republicans’ governing majority if they win the House.

Rep. Kevin McCarthy, the Republican poised to be House speaker if the GOP takes control of the chamber, was optimistic, telling supporters, “When you wake up tomorrow, we will be in the majority.” Democratic House Speaker Nancy Pelosi countered that her party would hold the chamber: “While many races remain too close to call, it is clear that House Democratic Members and candidates are strongly outperforming expectations across the country.”

The House Democrats kept their seats in competitive districts from Kansas to Rhode Island.

Many competitive districts remain too close to call, from inland California to upstate New York.

The Republicans may hold only a single-digit majority in the 435-member chamber.

In governors’ races, the GOP faced unexpected headwinds in flipping the office in conservative Kansas, while Democrats were nervous about their prospects in the race in Oregon, typically a liberal bastion.

Despite their liberal history, states like Massachusetts, Maryland and Illinois have elected Republican governors in the past. But the Republican candidates this year appeared to be too conservative for these states, handing Democrats easy victories.

Currently, Republicans occupy 28 of the 50 governors’ mansions… and they appear to be holding onto their majority.

However, the gubernatorial races in Kansas, Arizona and Nevada remain too close to call.

Before Tuesday’s elections, Republicans controlled 32 of the 50 state senates, in addition to 30 of the 49 statehouses (Alaska’s House is split 50-50, and Nebraska’s legislature has only a state Senate, no House.)

In 23 states, the GOP currently boasts a trifecta: control of the statehouse, the state senate and the governor’s mansion.

By comparison, the Democrats hold only 14 trifectas. Each of the remaining 13 states has a divided government.

The Democrats are currently counting a net gain of four trifectas, all in states that previously had divided governments. Nevada’s race for governor may bring that net gain down to three.

The Republicans remain on track to hold all 23 of their trifectas, with the Democrats failing to make even a dent.

The GOP looks more powerful further down the ballot… although nothing is certain yet.