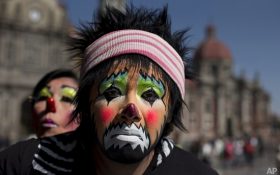 A Mississippi county has had enough of the creepy clown craze, at least until after Halloween.

Kemper County supervisors this week banned people from wearing any clown costume, mask or makeup in public. The local law carries a $150 penalty, and it will be lifted Nov. 1.

The Kemper County Messenger reports that supervisors President Johnny Whitsett says it’s a matter of public safety because people could react badly if they get scared by a clown in their yard.

The county along the Alabama line has a population of about 10,000.