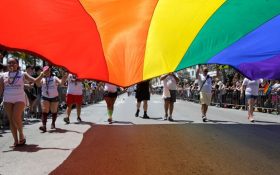 The Democrats have tried to bill themselves as a party of inclusion, and fierce defenders of LGBT rights.

But apparently none of that applies to gay Republicans — something one Congressional candidate is learning the hard way.

The LGBT community is furious after the Democratic Congressional Campaign Committee began airing on Arizona television attack ads against Sheriff Paul Babeu, an openly gay Republican running for a seat in the U.S. House of Representatives.

Fifteen years ago, Babeu served as headmaster of a private school in Massachusetts, which became the subject of thoroughly debunked rumors about student abuse.

But it looks like the Democrats aren’t going to let the truth get in the way of some good hate speech. Throughout the commercial, words like “sexual abuse” and “strip” flash across the screen.

The ad ends with the ominous warning, “We can’t trust him with our kids.”

Meanwhile, Babeau has served as a member of the National Guard, as a police patrolman, and as Pinal County sheriff, where hundreds of thousands of people (including children) have trusted him with their lives.

The ad is designed to make voters fearful of Babeu’s sexuality, nothing more, and points out longstanding hypocrisy within the Democratic Party toward LGBT issues.

“Attack ads don’t get more homophobic than this,” said Gregory T. Angelo, president of the Log Cabin Republicans, a GOP advocacy group that fights for LGBT rights. “Not only is this commercial factually inaccurate, but it shows just how low the DCCC is willing to go to stop a gay Republican from being elected to Congress. Democrats love to say they support the LGBT community — unless you’re a gay Republican, in which case floating the specter of gays as child predators and deviants is fair game.”