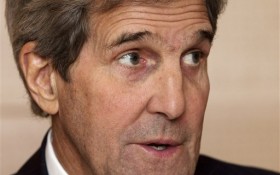 Maybe President Barack Obama shouldn’t let his secretaries of state use email at all.

In an ironic twist, the ongoing investigation into former Secretary of State Hillary Clinton’s handling of classified information on a private email server has swept up another Obama cabinet member.

State Department spokesman John Kirby said then-Senator Kerry used a “non-official account” to send email to Clinton and then-national security adviser Tom Donilon in 2011. Portions of the message were classified as “secret” last week and censored when it was released along with about another 1,000 of Clinton’s emails on Friday.

The non-redacted portions of the message in question refer to developments in India, Pakistan and Afghanistan.

Several hours after Kerry sent the email, Clinton forwarded it to a staffer with the instructions “pls print.”

Another email from 2012 was classified as “confidential.” Kirby could not immediately say if that message was sent from Kerry’s non-official account.

There was no indication that the information in Kerry’s email was considered classified at the time, but it’s another embarrassment for an Obama Administration that has repeatedly faced questions about its ability to protect national secrets.

Kirby said the account that Kerry used to send the email from his iPad is no longer active. Let’s hope it stays that way.