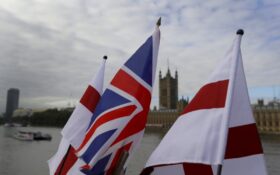 British Prime Minister Boris Johnson said Friday that the U.K. must prepare for a no-deal break with the European Union unless there is a “fundamental” change of position from the bloc, as the two sides swapped blame for failing to strike a deal with just weeks until the end-of-year deadline.

Johnson accused the EU of refusing to give Britain a trade deal like the one it has with Canada, which the U.K. is seeking. His spokesman went further, saying that the talks are effectively finished.

“The trade talks are over,” spokesman James Slack said. “The EU have effectively ended them yesterday” by stating at a summit in Brussels that the U.K. would have to significantly change position or there would be no deal.

Reiterating a statement by Johnson earlier, he said that “only if the EU fundamentally changes its position will it be worth talking.”

EU leaders insisted they still want a deal —- though as European Commission President Ursula von der Leyen said, “not at any price.”

“There is only any point in Michel Barnier coming to London next week if he is prepared discuss all the issues on the basis of legal texts in an accelerated way without the U.K. being required to make all of the moves,” Slack said.

Britain toughened its stance and ramped up tension without quite making good on Johnson’s threat to walk away from negotiations if a deal was not struck by the EU summit that ends Friday.

As far as I can see they have abandoned the idea of a free trade deal. … Unless there is a fundamental change of approach we are going to go for the Australia solution,” Johnson said in London.

Australia has no comprehensive trade deal with the EU. Johnson’s Conservative government insists Britain can still thrive under those conditions, which would mean tariffs and other barriers between the U.K. and the EU, its biggest trading partner. But many economists say it would be devastating for many British businesses, which are already struggling with a huge economic hit from the coronavirus pandemic.

Britain officially left the EU on Jan. 31 but remains part of its economic structures until Dec. 31. The two sides have been trying to strike a deal on trade and other relations before then, and say in practice it must be agreed this month if it is to be ratified by year’s end.

Months of talks have ground to a halt on the issues of fishing — highly symbolic for maritime nations on both sides — and rules to ensure common regulatory standards and fair competition. The EU fears the U.K. will gain an unfair advantage by slashing food, workplace and environmental standards and pumping state money into businesses once it is free of the bloc’s rules.

Britain accuses the bloc of seeking to impose demands that it has not placed on other countries it has free trade deals with, such as Canada.

“They want the continued ability to control our legislative freedom, our fisheries, in a way that is obviously unacceptable to an independent country,” Johnson said.

German Chancellor Angela Merkel said she still believes it would be in both sides’ interest to have a deal.

“No one, neither Britain nor the EU, wants an agreement at any price,” she told reporters in Brussels. “We are prepared to continue negotiating. We have seen light but of course also still shadows in the most recent negotiations, and if it is up to the European Union — and me personally — we should simply continue these talks.”

“Let’s keep in mind that it is the U.K. that wanted to leave the EU and needs an agreement much more than we do,” he said in Brussels.

Trust between the two sides, already frayed by years of Brexit acrimony, took a nosedive last month when Johnson introduced legislation that breaches parts of the withdrawal agreement he himself signed with the EU only last year.

The European Parliament, which must approve any deal, has vowed not to approve any trade deal if the U.K. government doesn’t withdraw this legislation. Britain says the bill, which has yet to become law, is needed as an insurance policy in case the EU behaves unreasonably after Brexit.