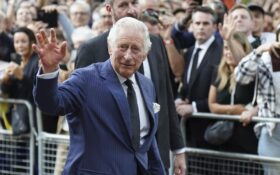 Since then, Charles has enjoyed an impressive polling bump. Despite the media’s renewed critiques of the monarch, Charles has almost watched his approval ratings double.

Pollsters at YouGov and The Times conducted one survey in May and on in September. For the recent one, they polled 1,727 British adults on Sept. 11 and 12.

In May, 32 percent of Britons in the YouGov survey said that Charles, the heir apparent, would not make a good king. Then, after the queen’s death, Britons warmed up to Charles. 63 percent expect Charles to make a good king.

He’s experienced a 31-point increase since May.

Critics have dismissed the tide of goodwill as a mere honeymoon period. The Washington Post ran a column called “Post Elizabeth: Charles gets an early poll bump — emphasis on early.”

However, he appears to be transcending the normal bounds of the honeymoon period.

Only 45 percent of Britons expect him to serve as a unifying figure.

The same percentage — a mere 45 percent — expects him to become “a different kind of monarch,” despite Charles’s long record of modernizing.

In fact, the new king has set several records. As prince, he became the first heir not educated at home, the first to earn a university degree and the first to grow up in the glare of the media.

Charles, 73, also ranks as the oldest person to inherit the British throne, although he is still younger than President Joe Biden was on Inauguration Day.

He was proclaimed king on Saturday in the first-ever proclamation ceremony to appear on television.

However, Charles has historically dealt with popularity problems.

He alienated many subject with his messy divorce from the much-loved Princess Diana, and by straining the rules that prohibit royals from intervening in public affairs, wading into debates on issues such as environmental protection and architectural preservation,

“He now finds himself in, if you like, the autumn of his life, having to think carefully about how he projects his image as a public figure,” said historian Ed Owens. “He’s nowhere near as popular as his mother.”

Charles must figure out how to generate the “public support, a sense of endearment” that characterized the relationship Elizabeth had with the British public, Owens said.

Unlike his mother, who refused to publicly discuss her views, Charles has delivered speeches and written articles on issues close to his heart, such as climate change, green energy and alternative medicine. He has especially faced criticism for his sanguine view of homeopathy.

“We know the monarch and certainly the monarch’s family – they’re not meant to have political voices. They’re not meant to have political opinions. And the fact that he’s been flexing, if you like, his political muscle is something that he will have to be really careful with … lest he be seen as unconstitutional,” said Owens, who wrote “The Family Firm: Monarchy, Mass Media and the British Public, 1932-53.”

Charles, who is the head of state for the U.K. and 14 other countries, including Australia, Canada, New Zealand and Papua New Guinea, has defended his actions.

“I always wonder what meddling is, I always thought it was motivating,” he said in “Prince, Son and Heir: Charles at 70,” a 2018 documentary. “I’ve always been intrigued if it’s meddling to worry about the inner cities, as I did 40 years ago and what was happening or not happening there, the conditions in which people were living. If that’s meddling, I’m very proud of it.”

In the same interview, however, Charles acknowledged that as king, he wouldn’t be able to speak out or interfere in politics because the role of sovereign is different from being the Prince of Wales.

A slight majority of Britons — 53 percent — consider it appropriate for the king to express his own beliefs.

His accession to the throne is likely to fuel debate about the future of Britain’s monarchy, seen by some as a symbol of national unity and others as an obsolete vestige of feudal history.