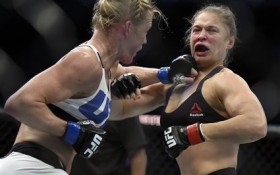 Ronda Rousey was the UFC’s unstoppable force until Holly Holm used the former champion’s aggression against her to produce one of the sport’s biggest upsets, delivering a knock-out kick to the head of Rousey in the second round.

Rousey left the stadium to receive treatment for concussion and facial cuts at a nearby hospital afterwards.

Rousey chased Holm around the ring at UFC 193 early Sunday morning – looking for the right hold and taking head shots along the way – until Holm saw an opening 59 seconds into the second round and snapped the devistating kick to the head that immediately dropped her more fancied opponent to the canvas.

An ecstatic Holm jumped around the ring while Rousey stayed on the canvas as she received medical treatment amid the roar of a stunned, record UFC crowd.

“She had me on the cage for a minute and obviously she was trying in for a take down right there … she had a lot of things she was trying so I’m just glad I put in the practice,” she added.

Rousey, a former judo Olympian, was unbeaten through 12 UFC fights before meeting Holm, and a win would have been her seventh title defense. Instead, Holm, a 34-year-old veteran female boxer from Albuquerque, New Mexico, has the championship belt.

“We figured her aggression was coming, if it didn’t that’s OK, but with footwork and my career we figured she wouldn’t give me that space,” Holm said. “There’s been a lot of blood, sweat and tears but it was all worth it.”

Rousey’s first public comments were in a social media post on Monday.

“I just wanted to thank everyone for the love and support. I appreciate the concerns about my health, but I’m fine. As I had mentioned before, I’m going to take a little bit of time, but I’ll be back,” a post on Rousey’s Instagram account said.

Her trainer, Mick Dolce, told reporters on Monday that Rousey would bounce back from defeat.

“Ronda has lost before, she lost at the Olympic games,” Dolce said. “That was a great test for her, and look at how she came back, she came back a multi-time world champion.”

Dolce said Rousey’s hospital stay was precautionary and tests had ruled out concussion.

“She was transported (to hospital) because she got knocked out,” UFC chief Dana White said in the wake of the bout. “She’s completely bummed out and depressed.”

White said a likely rematch between Holm and Rousey would put other potential matchups on the backburner.

“We don’t make fights the night of the fight, but the rematch makes a lot of sense,” he said. “The rematch is what the people want to see.”

In the other title bout, a bloodied Joanna Jedrzejczyk outlasted Valerie Letourneau to successfully defend her straw-weight belt in a five-round slugfest.

Jedrzejczyk (11-0) won a unanimous points decision over Letourneau (8-4) who offered the champion one of her tougher fights in some time.

The six-time Muay Thai world champion Jedrzejczyk started to pressure her opponent from the second round with some trademark, lightning-quick combinations to Letourneau’s head, while forcing the challenger to keep her distance with some effective kicks.

Organizers announced a crowd of 56,214 at Melbourne’s Etihad Stadium, which normally hosts Australian rules football matches. The mark eclipsed the 55,724 fans who attended UFC 129 at Toronto’s Rogers Centre in 2011.

Rousey, 28, has taken UFC by storm since her debut in 2012 and her success has led to several movie projects as well the publishing of her autobiography.

But it was Holm’s calm confidence and the manner of her win that attracted all the attention Sunday.

Holm, a former undisputed welterweight boxing champion, said the moment of her UFC title victory was “one of those moments that you live for.”

“They’re the scariest moments. This fight was a lot for me mentally,” she added. “I couldn’t tell you how many times I cried in the gym leading up to this fight.

“It’s a lot to take in, but those kinds of fights are the ones where a loss is devastating but a win is that sweet of a victory.”