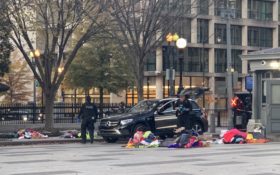 The U.S. Secret Service has confirmed that it successfully stopped an unauthorized vehicle attempting to sneak into the White House.

A message from the U.S. Secret Service’s Twitter account reads: “An unauthorized vehicle attempted to gain entry to the White House complex by following another vehicle that was lawfully entering at an external complex checkpoint.”

An unauthorized vehicle attempted to gain entry to the White House complex by following another vehicle that was lawfully entering at an external complex checkpoint.

The vehicle was stopped and the individual was immediately taken into custody by Secret Service U.D. Officers. pic.twitter.com/ex406WNK87

The suspicious person was stopped after closely tailing a vehicle entering a White House checkpoint.

The driver, a woman in a Mercedes-Benz SUV, was taken into custody shortly after and charged with unlawful entry, according to The Washington Examiner.

The disturbance occurred at 4:45 a.m., The Times writes.

It also writes that the woman had been trying to breach the White House for quite some time.

Secret Service and the D.C. Explosive Ordinance Disposal unit responded to the incident and closed off a part of Pennsylvania Avenue.

Photos were taken in the aftermath of the arrest, which shows police searching the vehicle. Brightly colored clothing can be seen on the ground next to the vehicle. Authorities are still searching for a motive.

Those are several pieces of luggage officers are sorting through. Clothing laid out along with other items. pic.twitter.com/e0wMAsWmGP