U.S. open to holding talks with Taliban to encourage negotiations - The Horn News 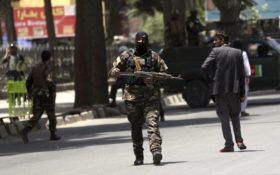 The United States is open to holding direct talks with the Taliban to encourage negotiations between the militant group and the Afghan government to end 17 years of war, U.S. officials said.

That marks a tactical shift by the Trump administration, which has previously only appeared willing to participate in discussions with the Taliban if those talks also involve the Afghan government. The U.S. officials said Monday that Afghan-to-Afghan negotiation remains the goal of any engagement with the militants.

The officials were not authorized to speak to media and requested anonymity.

The Taliban have long refused direct talks with the Afghan government, demanding instead to negotiate with Washington. The militants have persisted in that stance despite Afghan President Ashraf Ghani’s unilateral extension of a holiday cease-fire last month in hopes of encouraging the militants to come to the bargaining table. With the Taliban continuing to mount deadly attacks, Ghani ordered government forces to resume military operations this month.

The unprecedented, three-day cease-fire by both sides had offered a rare glimpse of peace for Afghans during which militants fraternized with security force members.

A Taliban official in the small Gulf Arab nation of Qatar told The Associated Press on Monday that no American official or intermediary has been in touch with them to start direct talks, and it had only heard of it in the media. The administration’s willingness to hold direct talks with the Taliban was first reported by The New York Times on Sunday.

The Taliban official, who also spoke on condition of anonymity because he was authorized to speak to journalists, said, “We wait for them to officially inform us.” But he added that if the U.S. is interested in talks, it should take steps to get Taliban leaders off a sanctions blacklist and support the formal opening of the Taliban office in Qatar where its political representatives reside. The official reiterated the Taliban’s call for the withdrawal of foreign troops from Afghanistan.

Asked if the U.S. was willing to hold direct talks with the Taliban, the State Department said Monday, the United States “is exploring all avenues to advance a peace process in close consultation with the Afghan government.”

The department added that “any negotiations over the political future of Afghanistan will be between the Taliban and Afghan government.”

Last August, President Donald Trump launched an Afghanistan strategy that centered on boosting the capabilities of Afghan security forces and aiming — with help from Pakistan and other interested nations — to compel the militants to negotiate. Secretary of State Mike Pompeo visited Afghanistan last week to reinforce its support for talks.

“The United States will support, facilitate, and participate in these peace discussions, but peace must be decided by the Afghans and settled among them. We expect that these peace talks will include a discussion of the role of international actors and forces,” Pompeo said after meeting Ghani in Kabul on July 9.

The U.S. invaded Afghanistan following the Sept. 11, 2001, terror attacks, and ousted the Taliban government that had hosted al-Qaida. It has about 15,000 troops in Afghanistan, mostly for training government forces.

The conflict appears stalemated, with insurgents controlling or contesting more than 40 percent of the country. The U.N. mission in Afghanistan said Sunday that 1,692 civilians were killed in violence in the first six months of this year, the highest six-month death toll since the systematic documentation of civilian casualties started in 2009.