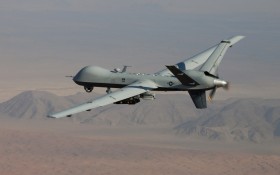 They were terrorists who pledged jihad on American citizens, and vowed to die for Allah.

But the United States Air Force helped deliver that death a lot sooner than they were expecting.

A massive, coordinated U.S. airstrike using multiple drones and manned aircraft struck a terror camp in Somalia over the weekend, killing more than 150 Islamic extremists who were preparing to launch a large-scale attack, likely against U.S. personnel at a drone base in the region, officials said Monday.

Navy Capt. Jeff Davis, a Pentagon spokesman, said the U.S. was watching the site, called Raso Camp, for several weeks. He said it appeared that the training was ending and the operational phase of a suspected attack was about to start.

The airstrikes targeted a forested military training camp run by the Islamic extremists 200 kilometers (124 miles) north of the capital Mogadishu, an intelligence official said, adding that the camp was al-Shabab’s main planning base. He said Somali officials helped the U.S. to pinpoint the location of the militants’ training base but did not give details.

According to Davis, the facility was totally destroyed. He said the U.S. estimated that as many as 200 fighters had been at the camp, including a number of trainers. He added that that there were no known civilian casualties.

The al-Qaeda-linked group, al-Shabab, has been linked to a number of attacks, including the detonation of a bomb aboard a commercial passenger jet last month that forced the plane to make an emergency landing in Mogadishu.

There are routinely military forces from the U.S. and the African Union Mission in Somalia (AMISOM) working in the country.