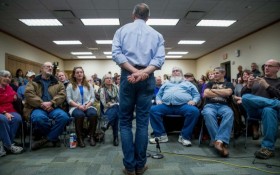 Two presidential candidates quickly announced their departure from the campaign trail after disappointing results from Iowa caucuses started to roll in Monday.

And former rivals are scrambling to grab their supporters.

Huckabee quickly garnered praise from GOP rivals like billionaire Donald Trump and Florida Sen. Marco Rubio after he ended his second campaign for the White House amid a dismal showing in the state that he won in his first bid eight years ago.

As caucus results were still streaming in, Huckabee wrote on Twitter that he was “officially suspending my campaign.” He thanked his backers for their loyal support, adding the hashtag #ImWithHuck. Calls to the Huckabee campaign for comment were not immediately returned.

And on the Democratic side, O’Malley ended his presidential campaign midway through vote-counting Monday, terminating a bid that failed to gain traction against rivals Hillary Clinton and Vermont Sen. Bernie Sanders.

O’Malley’s decision to drop out of the race came even before a winner had been declared but as early results showed O’Malley garnering negligible support in the first primary contest. His plans were disclosed by two people familiar with his decision, who weren’t authorized to discuss the decision publicly and requested anonymity.

The former two-term governor and Baltimore mayor campaigned as a can-do chief executive who had pushed through key parts of the Democratic agenda in Maryland, including gun control, support for gay marriage and an increase in the minimum wage.

Maryland’s top lawmakers, including Sens. Barbara Mikulski and Ben Cardin, sided with Clinton and O’Malley won the endorsement of just one member of Congress — Rep. Eric Swallwell of California.