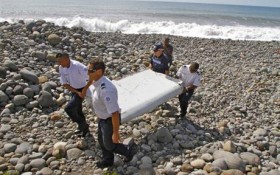 Malaysia’s government said Thursday that two more pieces of debris, discovered in South Africa and Rodrigues Island off Mauritius, are “almost certainly” from Flight 370, bringing the total number of pieces believed to have come from the missing Malaysian jet to five.

The aircraft mysteriously disappeared more than two years ago with 239 people on board, and so far an extensive underwater search of a vast area of the Indian Ocean off Australia’s west coast has turned up empty.

Though the discovery of the debris has bolstered authorities’ assertion that the plane went down somewhere in the Indian Ocean, none of the parts thus far has yielded any clues into exactly where and why the aircraft crashed. Those elusive answers lie with the flight data recorders, or black boxes, which may never be found, said Geoff Dell, a specialist in accident investigation at Central Queensland University in Australia.

“It shows they’re looking in the right ocean — that’s about it,” Dell said.

The two newly identified pieces of debris were found in March. Malaysian Transport Minister Liow Tiong Lai said one is an engine cowling piece with a partial Rolls-Royce logo, and the other is an interior panel piece from an aircraft cabin — the first interior part found from the missing plane.

An international team of experts in Australia who examined the debris concluded that both pieces were consistent with panels found on a Malaysia Airlines Boeing 777 aircraft, Liow said.

“As such, the team has confirmed that both pieces of debris from South Africa and Rodrigues Island are almost certainly from MH370,” he said in a statement.

All five pieces have been found in various spots around the Indian Ocean. Last year, a wing part from the plane washed ashore on France’s Reunion Island. In March, investigators confirmed two pieces of debris found along Mozambique’s coast were almost certainly from the aircraft.

The jet, which vanished on March 8, 2014, while flying from Kuala Lumpur to Beijing, is believed to have crashed somewhere in a remote stretch of the southern Indian Ocean about 1,800 kilometers (1,100 miles) off Australia’s west coast. Authorities had predicted that any debris from the plane that isn’t on the ocean floor would eventually be carried by currents to the east coast of Africa.

Most of the passengers on the plane were Chinese, and many of their families have refused to give up hope that they could somehow still be alive despite the discoveries of debris.

“I just don’t believe what they said and no matter how many pieces of debris they’ve found, I just don’t think it is true,” Zhang Qian, whose husband Wang Houbin was on the flight, said in Beijing. “Unless we have a clear and full explanation of what has really happened from the beginning to the end, solving all the puzzles, we just feel they are still trying to trick us.”

Investigators are examining marine life attached to the debris to see if it could somehow help them narrow down where the plane entered the ocean, but haven’t discovered anything useful yet.

The interior part, identified by its decorative laminate, is a panel from the main cabin and is believed to be part of a door closet, the Australian Transport Safety Bureau said in a technical report.

But even this interior piece is also unlikely to prove very helpful to investigators, said Dell, the accident investigation expert. It won’t, for example, answer the question that some have raised about whether anyone was still at the controls of the plane at the end of its flight, or whether the plane spiraled uncontrollably into the water after running out of fuel.

“I wouldn’t hang your hat too much on what it says, other than it’s got to come out of the airplane somehow and that suggests there was a structural failure in the fuselage that allowed it to get out,” he said. “But how, exactly — who knows?”

That part was found by tourists on Rodrigues Island, while the piece with part of a Rolls-Royce logo was found by an archaeologist while walking along South Africa’s southern coast.

Ron Bishop, head of aviation at Central Queensland University, said the debris may help the investigation in a less direct way: by leading to more debris discoveries.

“The best part about it is, it makes it where now anytime anyone finds something on a beach that’s weird-looking … they’ll turn it in,” Bishop said. “I’m sure there’s tons of this lying on beaches — we’re just not noticing it that much.

As for the underwater search, crews have combed more than 105,000 square kilometers (40,000 square miles) of the Indian Ocean to no avail. They expect to complete their sweep of what they have determined to be the plane’s most likely location by the end of June.