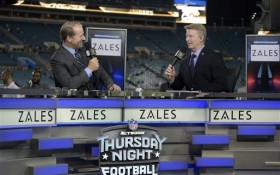 The NFL has picked Twitter to stream its Thursday night games.

When the league negotiated its latest deal for Thursdays, it decided to sell the streaming rights separately for an “over the top” broadcast. This past season, it partnered with Yahoo to stream a game from London that took place on a Sunday morning in the United States.

Only the 10 Thursday games on CBS and NBC will be streamed through Twitter under a one-year agreement, the NFL announced Tuesday. They will be free worldwide on all devices through the Twitter platform. Viewers will not need to be registered Twitter users.

The NFL Network-only Thursday games are not part of the deal.

The league wants to experiment with digital broadcasts to see how they might fit into future strategies. In the meantime, this also offers a new revenue source with digital companies eager to get involved in live sports.

So far, the audience for NFL streams has been significantly smaller than that for traditional television. The Yahoo broadcast of the Bills-Jaguars game from London in October averaged a worldwide audience of about 2.4 million. A Jets-Dolphins matchup from London earlier that month, which started at the same time, averaged more than quadruple that in the U.S. alone with 9.9 million viewers on CBS.

The Bill-Jaguars game was available on TV only in the teams’ home market, whereas the Thursday night broadcasts are nationally televised.

The London game took place at a time of day when fans might be less likely to find themselves in front of a TV. For “Sunday Night Football,” only a tiny percentage of viewers typically watch online. Those broadcasts are “authenticated,” which means fans must log in as a subscriber to a cable or satellite package. The Thursday night Twitter streams will be available free to any user.

The NFL launched “Thursday Night Football” on NFL Network in 2006 with eight games, which grew to 13 by 2012. In 2014, the league partnered with CBS for a 16-game slate — half simulcast on CBS and NFL Network and half solely on NFL Network, with CBS producing all the games with its top announcing team. CBS received the rights again for 2015.