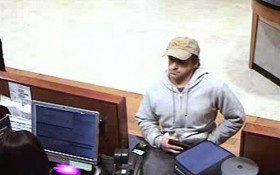 This is a dirty job one Discovery Channel star wouldn’t do.

Fans of the TV show “Dirty Jobs” noticed that photos of an Oregon bank robbery suspect resembled host Mike Rowe. The attention prompted a bemused Rowe to mention that he was in Kansas at the time.

The Mail Tribune reports that police in the city of Medford released surveillance photos of the suspect on social media, leading many people to comment that the man looked a lot like Rowe.

The TV host told the newspaper Wednesday that he “laughed out loud” when he saw the photos. He agreed the man was his doppelganger.

The Rowe lookalike is accused of demanding cash from a Chase Bank branch on Monday. Police are still looking for the real suspect.