Turkey admits to shooting down Russian jet - The Horn News 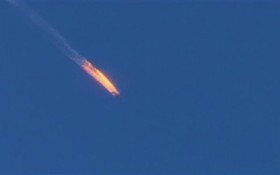 Turkey shot down a Russian fighter plane early this morning, supposedly after an incursion into Turkish air space. It was the first time a NATO member has downed a Russian plane in a half-century.

Now, tensions between Washington and Moscow are reaching a boiling point, as America and her NATO allies are scrambling for an emergency meeting of the alliance’s governing body.

Russian President Vladimir Putin called Turkey’s action a “stab in the back by the terrorists’ accomplices” and warned of “significant consequences.”

Turkish Prime Minister Ahmet Davutoglu insisted his country has the right to take “all kinds of measures” against border violations, and called on the international community to work toward “extinguishing the fire that is burning in Syria.”

Turkey said the Russian Su-24 ignored several warnings that it was nearing, then intruding, into Turkish airspace. Russia insisted the plane stayed over Syria, where it was supporting ground action against rebels.

Rebels said they fired at the two parachuting pilots as they descended, and that one had died. A rebel spokesman said they would consider releasing the body in exchange for prisoners held by Syria. The fate of the second pilot was not immediately known.

Before the incident, Russia and the West appeared to be moving toward an understanding of their common strategic interest in eradicating the Islamic State group following the bombing of a Russian airliner over Sinai and the attacks in Paris.

The Turkish Foreign Ministry invited diplomats from the five U.N. Security Council member countries for a meeting to brief them about the incident. Separately, the Russian charge d’affaires was also invited for a meeting during which Turkey “conveyed its sensitivities” over border violations.

Turkey has complained repeatedly that Russian planes supporting Syrian President Basher Assad were straying across the border — a complaint repeated to the Russian ambassador last Friday.

The Russian plane was supporting Syrian troops which have been on the offensive in an area controlled by several insurgent groups including al-Qaida’s branch in Syria, the Nusra Front, and the 2nd Coastal Division and the 10th Coast Division that includes local Turkmen fighters.

A Turkish military statement said the plane entered Turkish airspace over the town of Yayladagi, in Hatay province.

Turkish officials released what they said was the radar image of the path the Russian plane took, showing it flying across a stretch of Turkish territory in Turkey’s southern-most tip, in the region of Yayladag, in Hatay province.

Last month, Turkish jets shot down an unidentified drone that it said had violated Turkey’s airspace.

Turkey changed its rules of engagement a few years ago after Syria shot down a Turkish plane. According to the new rules, Turkey said it would consider all “elements” approaching from Syria an enemy threat and would act accordingly.

Following earlier accusations of Russian intrusion into Turkish airspace, the U.S. European Command on Nov. 6 deployed six U.S. Air Force F-15 fighters from their base in Britain to Incirlik Air Base in Turkey to help the NATO-member country secure its skies.

Sarah Lain, an analyst at the Royal United Services Institute, said the last time she could remember a NATO member country —the United States — shooting down a Russian/Soviet plane was the 1950s. “But the Soviets appear to have shot down more U.S. planes amid the Cold War,” she added.

Video of the shotdown Su-24 was released by Russia Today, and can be seen here: