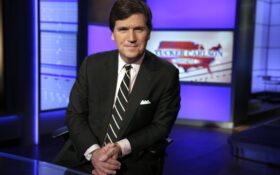 Whether he likes it or not, for years Tucker Carlson has served as the conservative movement’s spokesmen—and when the audience at a recent speech asked him to name the candidate he’ll endorse in the 2024 presidential primaries, he was ready with an answer.

Carlson took a stab at the 2024 endorsement question—but he was clearly uncomfortable, because the audience asked him a definitive question: Would you back President Donald Trump or Florida Governor Ron DeSantis?

“With the 2022 (sic) Republican primary election happening soon, who do you plan to support: Donald Trump or Ron DeSantis?” asked a young man named Joshua.

“Who am I going to support? Well, Joshua, as you’ve noticed, my endorsement means a lot to American voters,” joked Carlson before emitting his famous, self-deprecating laugh.

Carlson said he definitely saw a clash on the horizon. The Trump and DeSantis forces look like “two forces moving toward one another at high speed,” Carlson told the AmericaFest in Phoenix, Arizona, hosted by the conservative organization Turning Point USA.

“I have no idea what’s going to happen” when the votes are finally counted, he admitted. “It’s a cliffhanger.”

But the Fox News host tried to buy a little time by speaking positively about the candidates, who both call Florida home.

Still, if you listen carefully, you might be able to read between the lines.

Carlson began by saying he spends “a lot of time in Florida, and I think Ron DeSantis has done an unbelievable job” as governor—so incredible that he won a landslide reelection and has topped several polls for the primaries. “I don’t know DeSantis that well, but let me put it this way—people move to Florida because he’s the governor,” Carlson started out.

Having that kind of support is unusual, Carlson continued, saying he’s hardly seen anything like it during his five decades as an American citizen who’s paid deep attention to our political history.

“I’ve lived in a lot of states. I grew up in California. I’ve lived in D.C., Rhode Island, Arkansas. I’ve lived in this country for over 50 years. I know it pretty well,” Carlson continued. “And I’ve never lived in a state where people at dinner are like, ‘I’m really glad we have our governor.’”

Then the top-rated primetime talking head moved on to Donald Trump, saying the 45th president had a totally transformative impact on his life…six years ago.

“I’m so grateful Donald Trump ran in 2016,” Carlson said. “Donald Trump completely changed my view of everything. Donald Trump is why I left Washington—and he did it in a really simple way: By asking questions no one around him could answer. He asked things like, ‘Why don’t we have a border?’”

After hearing Trump’s blunt, outsider questions, Carlson—who’s been a political journalist for more than 30 years—realized, “I live in a city where nobody can defend what they’re doing.” And in that case, “you shouldn’t be doing it.”

Soon he came to realize that secrecy swallows up everything that happens inside the Beltway, including the reason we still belong to NATO and the still-sealed details of the 1963 JFK assassination.

After Carlson praised Trump’s campaign from two presidential cycles ago, he moved on to saying great things about Trump as a person.

“I actually love Donald Trump, as a guy,” saying he’s known him for 20 years as a figure in the media. “I think he’s one of the funniest people I’ve ever talked to in my life.”

“You don’t actually want to interview Trump, because you can’t get him to answer any questions, because it’s the Trump Train: You can get on or off, but you can’t steer it,”  he said. “But talking to Trump is one of the great animal joys of life.”

He said the Fake News media may characterize Trump as this force for evil, but “that’s Liz Cheney,” he joked. “They always tell the opposite of the truth.”

“I think there are plenty of things to criticize about Trump…but the idea that he’s personally some monster is just absurd. It’s just another lie. They always tell you the opposite of the truth. Trump is totally charming and engaging, and fun and interesting.”

He’s also “completely original,” although “he’s not that great at hiring.”

Then it came time to make a decision: “Let’s be honest: Who cares what I think?” he asked.

Based on his cable TV audience, a lot. The audience for “Tucker Carlson Tonight” grew by three percent this year, according to the Nielsen ratings. Compare that to his liberal competition. “CNN and MSNBC experienced significant year-to-year declines in 2022. MSNBC averaged 733,000, down 19% from 2021. CNN averaged 568,000 viewers, down 27%,” wrote Stephen Battagglio of the Los Angeles Times.

People are waiting for an answer, but Carlson said, as a journalist, he doesn’t feel like he needs to give one out loud.

“I’m not endorsing anybody,” Carlson said.

That may be true officially. But if you parse his answer, Carlson praised DeSantis’ job as a governor and a leader, while praising Trump’s role as a campaigner and “a lot of fun.”

It’s obviously far from settled, but based on that speech, it seems clear which candidate Carlson believes would do better in office.