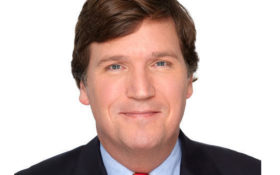 And he’s made a bold prediction.

Amid the vice presidential decision, Tucker is making a bold guarantee about the pick, calling what’s often referred to as the “Veepstakes,” the most “consequential in history.”

In other words, America should brace itself should voters pick the Democrats this November.

But Carlson is arguing that it wouldn’t be Biden tearing the country apart policy by policy — it’ll be his vice president whose responsible.

He took aim at two California power players on the list, each of whom could be soon accepting the nomination.

The first, a no-brainer in Sen. Kamala Harris, D-Calif.

The other: Rep. Karen Bass, D-Calif.

Carlson labeled Harris a winner — but not in a complimentary way. His point was that Harris does whatever it takes to win, whether it’s supporting both sides of an issue or promising free healthcare to illegal immigrants.

Carlson’s words add up to a larger point.

With Harris as President, no one will know what she believes in.

And at a time like this, the last thing the U.S. needs is more uncertainty.

On the other hand, Bass was described by Carlson as a “hydrogen bomb” ready to explode the harshest liberal polices all across America.

She did support Cuban communist dictator Fidel Castro, after all.

“Unlike Kamala Harris,” he said, “Karen Bass means it.”

What does she mean exactly?

Well, according to Carlson she supports reimporting illegal immigrants who’ve committed crimes back into society — on taxpayers’ dime — and she even voted to repeal an anti-discrimination law in her home state of California.

“The details are so shocking that virtually no media outlet bothers to cover them,” Carlson added. “But it is all real.”