Tucker Carlson DESTROYS this illegal immigrant (he had NO comeback!) - The Horn News 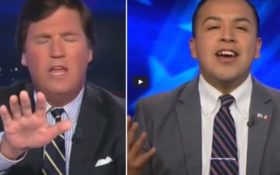 Fox News star Tucker Carlon had an illegal immigrant Cesar Vargas  on his show — and one brilliant question had Cesar Vargas stammering, unable to answer.

Vargas is a self-declared illegal immigrant that also uses a legal loophole to remain in America — and practices law.

Carlson, though, wasn’t about to back down.

“Let me ask you a really simple question: If more immigration always makes the country richer, then why does the state with the most immigration, which is California, keep getting poorer?” Carlson asked. “It now has more poverty than any state. One out of five Californians is poor. If immigration makes us richer, why is California getting poorer? What is the answer to that I wonder?”

Vargas had no answer. He ducked and dodged and stammered, but he couldn’t come up with an effective retort.

“Well I would just say that California has a surplus of more than $10 billion into their state economy. Why?” Vargas responded. “Because many factors. But, because it’s a welcoming state…”

“Wait a second. Wait a second!” Carlson said, holding Vargas’ feet to the fire. “California has gotten poorer — one in five Californians is poor. That was not the case when I grew up in California. It has the most immigration.”

“So if immigration always makes us more prosperous, why is the opposite happening in California?” Carlson asked. “It’s a very simple question.”

Vargas continues to dodge the point — and Carlson brings home the argument with a slam dunk.

“How about this: Why don’t we stop with the magical thinking and get real? Because things are changing really fast in this country, and we care about our country, we want it to be the best it can be,” Carlson said. “And the point is not to make other countries happy, it’s to protect our people. So, I hope you’ll give us a pass on trying to think that through in a rational way.”

Hard to argue that.

You can see video of the epic verbal beatdown here —

Who made the better point?

Who do YOU think won the argument?