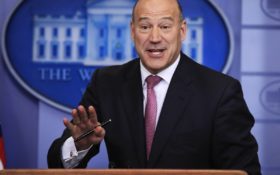 Top economic adviser Gary Cohn is leaving the White House after breaking with President Donald Trump on trade policy, the latest in a string of high-level departures from the West Wing.

Cohn, the director of the National Economic Council, has been the leading internal opponent to Trump’s planned tariffs on imports of steel and aluminum, working to orchestrate an eleventh-hour effort in recent days to get Trump to reverse course. But Trump resisted those efforts, and reiterated Tuesday he will be imposing tariffs in the coming days.

Hillary Clinton and Charles Manson have WHAT in common? [sponsored]

The announcement came hours after Trump denied there was chaos in the White House.

“Everyone wants to work in the White House,” Trump said during a joint press conference with Swedish Prime Minister Stefan Löfven. “They all want a piece of the Oval Office.”

In a statement, Cohn said it was his honor to serve in the administration and “enact pro-growth economic policies to benefit the American people.”

Trump praised Cohn despite the disagreement on trade, issuing a statement saying Cohn has “served his country with great distinction.”

Cohn is a former Goldman Sachs executive who joined the White House after departing the Wall Street firm with a $285 million payout. He played a pivotal role in helping Trump enact a sweeping tax overhaul, coordinating with members of Congress.

Cohn’s departure is a blow to Capitol Hill Republicans and business groups who were hoping Trump might listen to their worries on tariffs — and that Cohn would serve as a moderating force as the administration pushes a renegotiation of the North American Free Trade Agreement. Earlier Tuesday, House Speaker Paul Ryan had said talks with the White House were “ongoing” and he was “encouraged” that the White House would adjust course.

Sen. Pat Toomey, R-Pa., who is trying to persuade the administration to target the steel and aluminum tariffs as narrowly as possible, acknowledged his side of the argument was increasingly outnumbered in the administration.

Josh Bolten, the President and CEO of the Business Roundtable, which opposes the coming tariffs, called Cohn’s exit “a real loss for President Trump and the American people.”

Trump loved to boast about the former executive’s wealth, but Cohn’s tenure in the White House was rocky. Cohn nearly departed the administration last summer after he was upset by the president’s comments about the racial violence in Charlottesville, Va. Cohn, who is Jewish, wrote a letter of resignation but never submitted it.

“Citizens standing up for equality and freedom can never be equated with white supremacists, neo-Nazis, and the KKK,” Cohn told The Financial Times at the time. “I believe this administration can and must do better in consistently and unequivocally condemning these groups and do everything we can to heal the deep divisions that exist in our communities.”

The comments came as Cohn was under consideration to serve as chairman of the Federal Reserve.

Earlier in the administration, Cohn found himself on the losing side of several contentious battles with Trump’s more nationalist-minded aides — including then-chief strategist Steve Bannon — on policies including the announcement of plans to pull the United States from the Paris Climate Agreement.

Cohn had also hoped to steer more than $1 trillion into infrastructure investments. But the multiple rollouts by the Trump administration failed to gain traction.

Cohn often faced ridicule among some inside the White House for being a registered Democrat who last year met with former Republican officials pushing a form of a carbon tax that was designed to reduce the risks from climate change.

Yet his stock improved to the point that he was one of names Trump was floating for chief of staff last month, when it looked like John Kelly was on thin ice. He was a frequent ally of Jared Kushner and Ivanka Trump in internal staff struggles.

Cohn told other White House aides in recent weeks that he would have little reason to stay if Trump followed through with his tariff plans, according to a White House official familiar with his views. The official spoke on condition of anonymity.

“I mean it is no secret that he disagreed with Trump on trade and he was opposed to the policy,” said Stephen Moore, who served as an economic adviser to Trump’s campaign.

The White House did not immediately announce a replacement for Cohn, whose deputy, Jeremy Katz, departed in January. Among those who have been discussed as potential replacements are CNBC commentator Larry Kudlow and Office of Management and Budget director Mick Mulvaney, according to a person familiar with the discussions.

“Will be making a decision soon on the appointment of new Chief Economic Advisor. Many people wanting the job – will choose wisely!” Trump tweeted late Tuesday.

Will be making a decision soon on the appointment of new Chief Economic Advisor. Many people wanting the job – will choose wisely!

In an earlier tweet, Trump sought to portray himself as the architect of the White House staff changes, writing, “I still have some people that I want to change (always seeking perfection).”

Trump acknowledged he is a tough boss to work for, saying he enjoys watching his closest aides fight over policy. “I like conflict,” he said during the press conference.