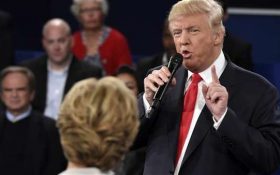 Donald Trump has always been a fighter — and last night he proved it in his second presidential debate with Democratic challenger Hillary Clinton.

After a rough few days that included leaked, lewd 11-year-old audio from Trump, the GOP candidate needed a strong performance last night. And he delivered.

A Horn News poll immediately after the debate showed that 97 percent of readers thought Trump carried the night. Even a poll from the left-leaning CNN/ORC actually showed Clinton slightly lost support throughout the night.

Trump used a series of compelling arguments and witty one-liners to punch and counter-punch at Clinton throughout the debate. Here are our five favorite Trump zingers — comment below to tell us what you think:

5) “There’s never been anybody in the history of politics in this nation that’s been so abusive to women.”

Trump saved some of his harshest rhetoric for Hillary’s husband, former President Bill Clinton, pointing out he was impeached, lost his law license, and even had to pay a sexual harassment settlement. Hillary Clinton has accused Trump of being anti-woman throughout the campaign, and last night Trump fought back hard. He staged a pre-event press conference with women who have accused Bill Clinton of sexual harassment or assault, and even tried to get them seats in his family box.

4) “If I win, I am going to instruct my attorney general to get a special prosecutor to look into your situation, because there’s never been so many lies, so much deception.”

Trump was relentless in his attacks on Hillary Clinton’s homebrew email server, and the Obama administration’s handling of the investigation. He even said point blank that Clinton would likely be in jail if he were president.

3) “I think she should be ashamed of herself.”

Clinton has spent her career caught in lie after lie, and attacking the victims of her husband. As Trump pointed out, she should be ashamed of herself — but Hillary doesn’t seem capable of shame.

2) “The letter C on a document –she didn’t even know what that letter meant.”

Seeking to undermine Clinton’s credibility — and to remind America that she’s a serial liar — Trump brought up Clinton’s notorious FBI interview. In the interview, Clinton claimed she didn’t know what the classified designation of “C” on top of documents meant. She’s either lying, incompetent, or both.

1) “Honest Abe never lied. That’s the big difference between Abraham Lincoln and you.”

Clinton made the awful choice to try to compare her flip-flopping on issues with diplomacy practiced by Abraham Lincoln. But Trump was having none of it. His line brought back memories of Lloyd Bentsen’s “You’re no Jack Kennedy” zinger from the 1988 vice presidential debate against Dan Quayle.

Tell us what you think — what were some of your favorite Trump lines of the night? Share below!