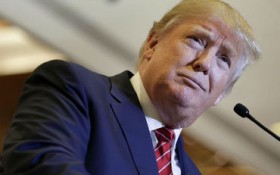 After using billionaire Donald Trump to get unprecedented ratings for televised debates and news programs, the media now seems obsessed with taking him down.

And they’ll use any outlandish allegation they can find to do it.

Stories have begun surfacing this week attempting to link Trump with a man named Felix Sater, who apparently had connections to the mob before becoming a government informant. But the actual substance behind the allegations appears paper thin, and looks like little more than an attempt to stop Trump’s momentum.

News agencies like the Associated Press published articles this week claiming that Trump tapped Sater to be a senior business adviser to his real-estate empire, despite the man’s past involvement in a major mafia-linked stock fraud scheme.

But here’s the reality – Trump simply partnered with a company where Felix Sater was an executive, Bayrock Group LLC.

Bayrock rented office space from the Trump Organization, starting in 2003.

But Sater’s criminal history was effectively unknown to the public at the time, because a judge kept the relevant court records secret and Sater altered his name. When Sater’s criminal past and mafia links came to light in 2007, Trump distanced himself from the man.

Trump said during an interview on Wednesday that he barely can remember Sater at all, despite media efforts to paint Sater as a close confidant.

“Felix Sater, boy, I have to even think about it,” Trump said, referring questions about Sater to his staff. “I’m not that familiar with him.”

According to Trump lawyer Alan Garten, Sater spent about six months prospecting for high-end real estate deals for the Trump Organization. He never had a formal employment agreement and never closed a deal.

Sater pleaded guilty in 1998 to one count of racketeering for his role in a $40 million stock fraud scheme involving the prominent Genovese and Bonanno crime families, according to court records. Prosecutors called the operation a pump-and-dump scheme, in which insiders manipulate the price of obscure stocks and then sell them to hapless investors at inflated prices.

Sater later launched a luxury real estate development career. Sealed court records prevented potential customers or partners from learning about his past association with organized crime. Sater altered his name, to Satter, and became a top executive in Bayrock, a development firm that partnered with Trump on the Trump Soho high-rise hotel in Manhattan and other branded luxury real estate deals.

Garten said Trump had no further interactions with Sater at Bayrock following the revelations of his criminal history.