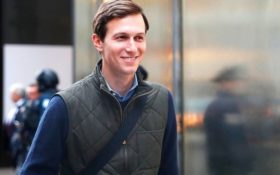 President-elect Donald Trump has made it clear that he cares about his family above just about everything else. Loyalty is one of his most valued attributes in a person, and the Trump family has always stood together.

The pride he has in his family was exemplified Monday, when he announced his 35-year-old son-in-law Jared Kushner will be named a senior advisor to his White House administration.

“Jared has been a tremendous asset and trusted advisor throughout the campaign and transition and I am proud to have him in a key leadership role in my administration,” Trump said in a statement.

Kushner and his wife Ivanka Trump recently purchased a home in Washington D.C., further evidence of his close involvement with Trump’s presidency.

While this move was expected after Kushner’s heavy influence throughout the campaign, the official appointment raises many questions from Trump supporters — and critics.

Who is Jared Kushner? Here are four things you need to know about the president-elect’s newest senior advisor —

#1 – He served as a key advisor throughout the campaign

Kushner could often be seen by Trump’s side throughout much of the campaign, and became known by some as a secondary campaign manager. It’s been reported that Kushner was screening Trump’s calls on election night and was described as Trump’s “eye and ears” during the campaign by communications director Jason Miller.

When Trump met with President Barack Obama at the White House, Kushner was there chatting with Obama’s Chief of Staff Denis McDonough. He’s been close to the President-elect throughout much of the presidential process, and it’s clear his opinions are highly regarded by his father-in-law.

#2 — He is a successful businessman on his own

Similar to his father-in-law, Kushner is a successful business man and real estate developer. He is the executive of Kushner companies, which oversees multiple real estate properties. According to the company’s website, he is the owner and manager of a staggering 20,000 apartments, 13 million square feet of office space and industrial holdings.

But his success doesn’t stop there. At the young age of 25, he purchased The New York Observer, and has developed stakes in multiple businesses, including his brother’s venture capital firm Thrive Capital, which invests in technology companies like Instagram, Paperless Post and Group.Me.

Although he is widely successful, Kushner has announced plans to divest his holdings and resign from Kushner companies in order to join the Trump administration.

The mainstream media has been attacking the President-elect’s administration moves for months. Kushner is no different.

The liberal media is claiming there could be a conflict of interest with Kushner’s business ties, despite Kushner’s announced plans to divest his private assets.

Critics assert that many of his business dealings involve foreign investors, which they claim — without evidence — could affect how he advises Trump on international relations.

But Kushner’s lawyer released a statement over the weekend detailing Kushner’s plans to resign from his position as chief executive of Kushner Companies and as publisher of the New York Observer. He plans to divest “substantial assets” upon taking a position in the West Wing.

In an effort to be as transparent and ethical as possible, Kushner additionally plans to file a public financial disclosure form to ensure critics that he will not influence policy with his business interests in mind.

But regardless of the clear disaffiliation with potentially controversial business dealings, critics likely won’t back off until his nomination process in complete.

Conflict of interest claims aren’t the only attempt sabotage Kushner’s appointment that critics have jumped on. Democrats are twisting a 1967 anti-nepotism statue to attack Kushner.

However, it’s a stretch.

The law was created after President John F. Kennedy appointed his brother as attorney general, and clearly states relatives are prohibited from joining a president’s cabinet.

But Kushner has been nominated for a senior advisor role, which is not part of the President’s cabinet.

And the proof of the legality of Trump’s appointment of Kushner lies in an unexpected place: former Secretary of State Hillary Clinton.

A court ruled in 1993 allowing Hillary Clinton to be appointed to Bill’s administration in order to work on her failed health care reform, debunking any claim that relatives cannot be appointed to White House positions.

Even Clinton pal David Brock defended Kushner’s appointment in a statement. “Kushner appears to be taking the proper steps regarding the ethics and disclosure requirements for federal employees,” he told The New York Post.

The president-elect is expected to address and diminish these criticisms on Wednesday, in his first official news conference since his victory in the presidential election.

Despite the attacks, Trump shouldn’t have any problem appointing Kushner — a nomination widely celebrated by Trump supporters.